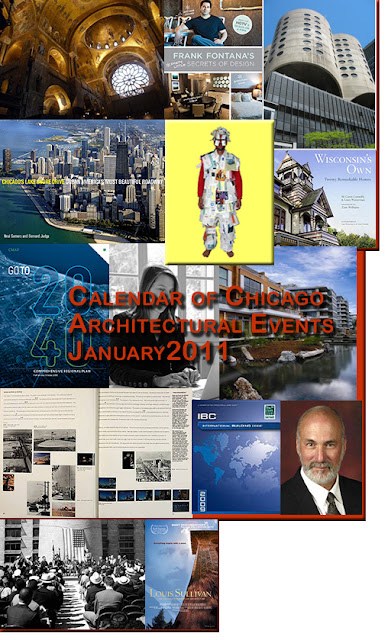 The year may be starting a bit slowly, but there's still nearly three dozen great architecture-related events already lined up on the January calendar.

It starts off with SEAOI's panel discussion on Bridge Failures this Tuesday, the 4th at the Parthenon (on Halsted Street, not the Acropolis.)  On Thursday the 6th, the Graham offers the first of two lectures being given this month in conjunction with their exhibition, Las Vegas Studio: Images from the Archives of Robert Venturi and Denise Scott Brown this one by Michael J Golec, with another by Bill Mackey on the 27th.  This coming Sunday, the 9th, the Lake Theater in Oak Park with be offering a benefit screening of the documentary Louis Sullivan: The Struggle for American Architecture, with director Mark Richard Smith in attendance for a Q&A.

There's quite a bit of sounding off, with conductor and pianist Yaniv Dinur talking about Music and Architecture: Design, Aesthetic and Form at lunchtime on Wednesday the 12th at CAF, and Carl Giegold of Threshold Acoustics talking about Speech, Hearing, Acoustics and AV in the Learning Environment at AIA Chicago lunchtime on Tuesday, the 18th.  The Art Institute's new assistant curator of architecture Alison Fisher talks about Bertrand Goldberg's endangered Prentice Hospital for Landmarks Illinois' lunchtime Preservation Snapshots lecture, Thursday the 20th at the Cultural Center.  On the evening of the 25th, architect Elizabeth Francis gives a talk at the MCA, while Farr Associates Doug Farr talks about LEED for Neighborhood Development at CAF lunchtime on the 26th, where Neal Samors and Bernard Judge discuss their new book, Lake Shore Drive: Urban America's Most Beautiful Roadway, same time and place, a week earlier on the 12th.

On the 11th,  again at the Cultural Center, the Central Advisory Council of Chicago Public Housing Residents will be holding a mayoral Candidate Forum on Public Housing in Chicago.  I don't know if any of the candidates have confirmed but, shockingly, this is the only forum I'm aware of where anyone's putting the screws to the candidates on the critical issues involving the city's built environment.

As usual, there's more, much, much more.  Check out all the events on the January Calendar of Chicago Architectural Events.