Do Housekeepers Make the Best Architecture Critics? koolhaas houselife at the Siskel on Sunday, Wednesday


Finished in 1998, the Maison à Bordeaux was one of the early commissions that made Rem Koolhaas a worldwide force:  a bravura piece of architecture, with a massive cantilever courtesy of Cecil Balmond, a central elevator platform that let the client, a newspaper editor paralyzed in an automobile accident, easily navigate its three levels, and numerous other experiments such as irregular sequence of porthole windows punctuating the concrete walls in the topmost story, all the work of an OMA design team that included, at that time,  Jeanne Gang. (You can see similar windows in the "Star wall" of the Studio/Gang's Starlight Theater at Rockford College.) 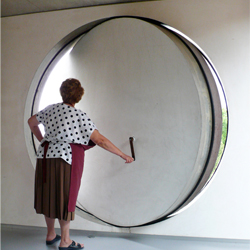 The house's owner died just three years after the house's completion, and according to critic Martin Filer, the building is now "falling apart after little more than a decade." It's documented in koolhaas houselife, a 2008 documentary that will have two showings at the Gene Siskel Film Center over the next few days.  In an interview with Jesús Díaz of Gizmondo, Ila Bêka, co-director of the film with Louise Lemoine, describes it as "a look on contemporary architecture that tries to escape from a strong current tendency of idealized representation of our architectural heritage that show us architecture as perfect icons and break the link between architecture and the life which is inside."

The vehicle for executing this aim is the Maison's housekeeper Guadalupe Acedo, whom Filer describes as "The production’s unlikely star . . . who seems to have wandered in from an Almodóvar comedy about a dysfunctional middle-class Madrid family. Her non-stop, throw-away commentary is by turns gossipy, sagacious, pragmatic, and critical, but she remains self-effacing and sympathetic to her unseen employers."