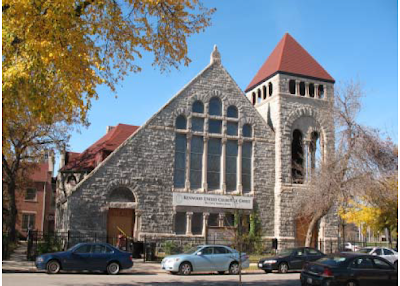 click images for larger view
At today's meeting of the Commission on Chicago Landmarks, landmark designation begins for the Kenwood United church of Christ, at 4600 South Greenwood, designed in 1887-1888 by one of Chicago's most active early architects, William W. Boyington.

As always, the Commission staff, in this case Terry Tatum, Lisa Napoles and Nikki Ricks, with Brian Goeken editing, have come up with another first-rate report, 39 pages on the building, its architect, style and time, with a wealth of  great photographs, both historic and current, a small sampling of which you see here.  It's not up on the website yet, but I'm sure it soon will be, and then you'll find it here.  As I mentioned before, these reports are some of the best Chicago history you can find, and you can download the stories of dozens of Chicago landmarks there. 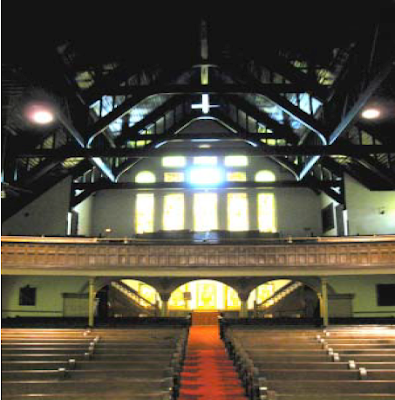 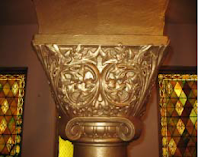 Kenwood United is a perfect example of the trickle-down theory as it applies to architecture.  Built in 1887 as the nondenominational Kenwood Evangelical Church for Chicago's economic elite at a time when the Kenwood neighborhood, then a suburb of Chicago, was described as the "Lake Forest of the south",  membership evolved as the "L" began to bring the common rabble down to the newly constructed apartment blocks that were taking the place of the old mansions.  The congregation was disbanded  in 1954, and the building was handed over the Kenwood-Ellis Community Church, which "had been founded in 1948 to serve Japanese-Americans that lived in the neighborhood as a result of World War II-era relocations."  It's now the Kenwood United Church of Christ, led since 1980 by Rev. Dr. Leroy Sanders, serving the now primarily Afro-American community with both spiritual and social services.

According to the Commission's report, the church was designed in the Romanesque style made popular at the time at Henry Hobbs Richardson . . .


The building’s rough-textured granite and sandstone walls, corner bell tower, round-arched entrances, windows and tower openings, and foliate-detailed columns and sculptural panels comprise a textbook example of this architectural style. A 1924 gymnasium wing by architects Chatten and Hammond is designed in a modest twentieth-century variation on the Romanesque Revival and complements the older church building.

W.W. Boyington was on of Chicago's original architects, arriving in the city in 1853, and designing a large number of the city's most prominent buildings, including the original Board of Trade.  Only a handful survive, most famously the Chicago Water Tower and Pumping Station, whose design was ridiculed by no less than Oscar Wilde ("a monstrosity with pepper boxes stuck all over it."), but which, as a survivor of the Great Fire of 1871, has become a symbol of the city. 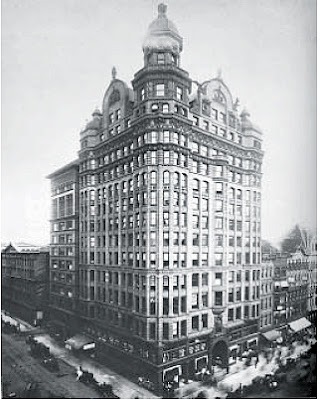 Boyington would live until 1898, and one of his most impressive concoctions was the 1892 Columbus Memorial Building, a million-dollar, 16 story skyscraper at State and Washington that was a symbol of the city's wealth. "A million dollars is a large sum to expend . . . when a building costing from $650,000 to $750,000 would  in all probability bring in the same rental," commented the Chicago Tribune, as quoted in Daniel Bluestone's invaluable book, Constructing Chicago.


Above the entrance arch . . . they placed a ten foot high statue of Christopher Columbus that had been sculpted in Rome.   . . The grand entrance for the building was twelve feet high and rose to the third story.  The lower two floors of the building were clad in statuary bronze . . . An octagonal  corner tower on the roof supported an illuminated glass globe of the world on which a cut jewel indicated the location of Chicago.

Vanitas Vanitatum, Omnia Vanitas.  The Columbus was unceremoniously destroyed in 1959 for a one-story "taxpayer" building - so called because it was designed to generate just enough revenue to cover real estate taxes while awaiting a more lucrative development - which was home for decades for Lebolt Jewelers.

That building was demolished, in turn, for the current State Street flagship of Old Navy. Now, over half a century after the destruction of the Columbus Building, that more lucrative development may finally be on tap.  Crain's Chicago Business reported last month that a New York company has acquired the Old Navy property for a cool $23,000,000, a price that can't be justified except by replacing the current structure with a high-rise.  Just don't expect anything like the Columbus's grandeur.

And the cycle continues. 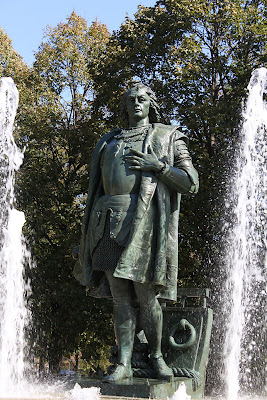 Moses Ezekiel's Columbus Statue, once placed above the entrance of W.W. Boyington's demolished 1892 Columbus building, now in Arrigo Park at Loomis and Polk.

One has to wonder magnificent this city could have been if we left evan half of the original Loop skyscrapers intact, and developed the newer postwar buildings west and south of the traditional Loop. It would be an extraordinary sight to behold. Chicago is a great city, but it could have been even greater.

I was wondering what happened to the statue. Interesting artifacts turn up all the time in this city.

Any idea why a church was landmarked? Most churches resist landmarking because they derive no tax benefits from it, and it removes their freedom to tear down the building in the future.

Thank you for the information about the former "Kenwood-Ellis Community Church." I have childhood memories of the place, but I wasn't sure of the exact address or whether it was still standing, since much of the surrounding neighborhood was urban renewed in the 1950's & 1960's.
In my early childhood (early 1950's), I attended a nursery school that met in the coach house behind the church (and in warm weather, we played outside in the yard between the church and the coach house). The church members were mainly Japanese-Americans (including the minister, whose name I think was Nishimoto). There was a large Japanese-American population in the neighborhood in the years after World War II, mostly ex-Californians who had been in internment camps during the war.
The nursery school, however, was ethnically and religiously diverse--Asian, white, black, Jews, gentiles (possibly even at least one Muslim family). From conversations with my parents years later, my understanding is that this was one of the few integrated nursery schools on the south side at the time.
I mostly remember the coach house and the yard, although I think I was in the main church building a couple of times for larger events. I still live not far from there, and now that I know the exact location, I'll go over there sometime and take a look.

As I understand it, the University of Chicago was very open to students of Japanese heritage during the 1940s which is one reason the area attracted Japanese=American families, many of whom moved into the North Kenwood area which offered low-cost housing to rent or buy. The community dissipated quickly in the post-war years, I believe.

Kenwood UCC is clad in Maryland Granite and I believe that it was built at roughly the same time as the Board of Trade building. So I wondered if the stone on KUCC is a "window" into the same stone that clad Boyington's Board of Trade building?
Also, the comment re: why KUCC would seek Landmark status? is interesting. We, of course, do not think of tearing it down at all. Currently it has ministries and community services operating in the church every day of the week. God's work is truly ongoing and this magnificent building is a house for that work!

BTW it is Rev. Sanders, rather than Saunders. His 31st Pastoral Anniversary will be celebrated on Sept. 11, 2011

Thank you, Rev. Walley for the great additional information. Apologies for the misspelling, which has now been corrected.