Chicago Under the Dome, only through Sunday. The urban visions of Level Chicago 2013

You have only through Sunday night to see the installations of Level Chicago 2013, at five separate locations along the Chicago.  As we wrote recently, it's a project of L.A. based LERATA (Laboratory for Experimentation and Research in Art, Technology and Architecture) and is intended to be a preview of a far larger project next year.
The one installation I haven't seen at all is Julio Obelleiro and Wildbytes Building Music, at the plaza of the 2 North Riverside, a/k/a Daily News Building at the river and Madison Street.  It projects images against the blank wall of the Civic Opera Building on the opposite of the river. 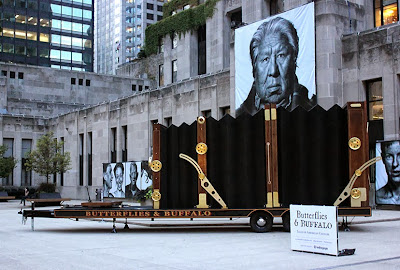 What I thought was the Level event at the Daily News Plaza is, instead, Butterflies and Buffalo, which features both the world's largest camera and the images it creates for photographer Dennis Manarchy.  BandB runs all the way through October 31, so we'll discuss it in a separate post, soon.

The other installations of Level are along a stretch of the river from Michigan Avenue to Clark. 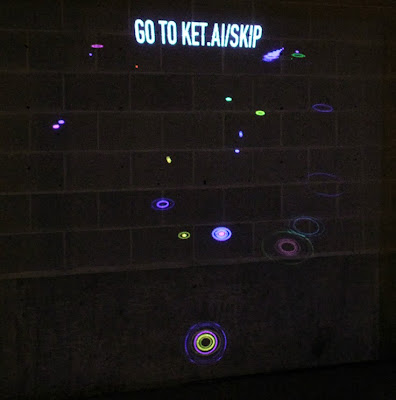 Skip message, by Daniel Sauter + Ketai LLC, is on the lower riverwalk between Clark and Dearborn.  It also features a projection, along the concrete wall that separates the walk from lower Wacker, and it features a mobile phone weblink that allows you to send text to appear on the display. 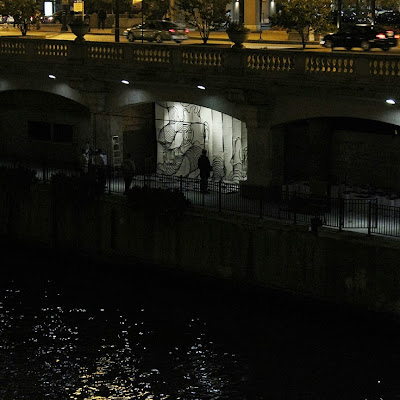 A block east, between Dearborn and State, there's Sabrina Raaf's Meandering River, based on mathematical equations scientists use to predict a river's morphology.  To create this installation, these snapshots are etched onto thermal material, hung down at the center, and trailing off to bottom and the sides. 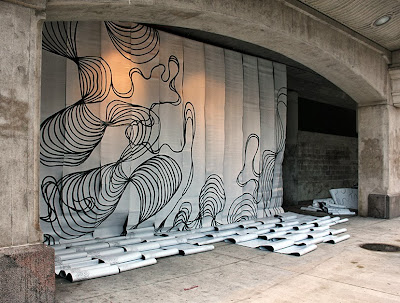 The last two installations,  by Daniel Miller, are in abject utility room under lower Wacker near the Bridgehouse Museum.  Site A takes video shot at a suburban site where the world's first nuclear reactor was rebuilt in 1943 and uses a rotating projector to cast the images across all the interior surfaces of the service room. 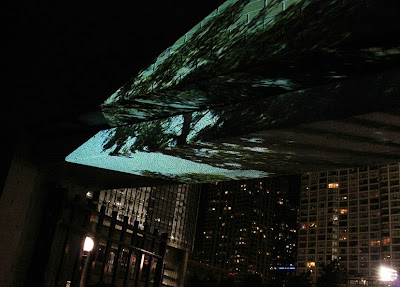 Perhaps, the most detailed and intriguing of all the installations is Miller's Contained. 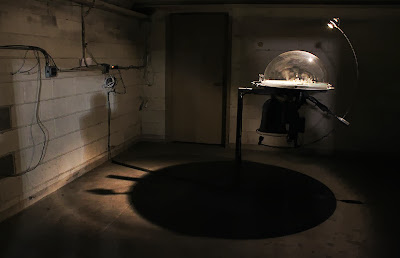 In a small, otherwise empty room, under a clear dome, you'll find an incredibly detailed model of Chicago, drawn from images on Google Earth.  Two spare metal arms hold lighting that complete a full rotation every 40 minutes to simulate light from the moon and sun falling on the city throughout the course of a day.  There's even a humidifier to create ‘smog.’ “In this dome I am exploring the closed system that we live in called earth,” writes Miller.  The dome's image is also picked up by a camera that feeds to a video screen just outside the room. 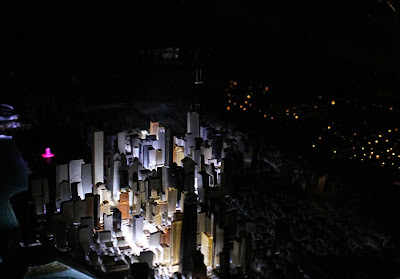 Between the model that is both exact and abstracted, and its sealing beneath the glass dome, in a closed-off room just steps from the actual skyline and the movement of human beings along the walkways, and in cars, buses and boats, Contained captures the mystery that lies between our physical world and the energies and desires that animate it. 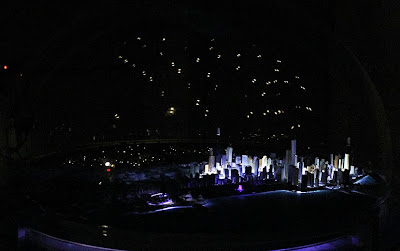 If this is what Level can accomplish with just five installations, a full-up version next year could be a very grand thing, indeed. 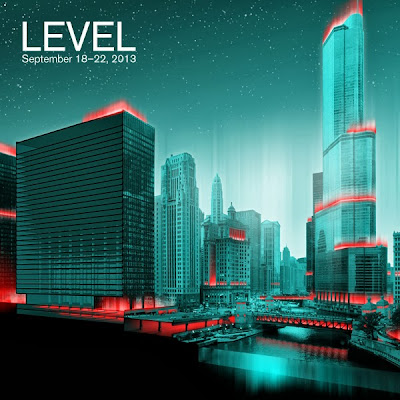 Level runs through Sunday at the locations on the map below.  Stated time is 6:00 to 10:00 p.m., but it seems that many installations really don't get started until the sun goes down.