It was like Richard Meier had bled all over Pioneer Court.   The usually underpopulated plaza had become a sea of white - tableclothes, linens, shirts, party dresses and . . . bowling pins. 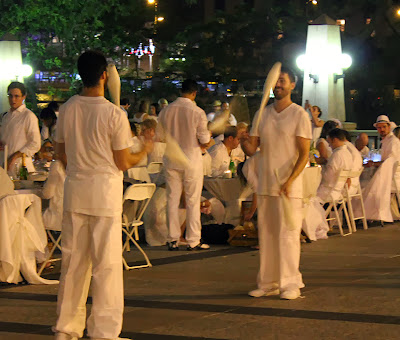 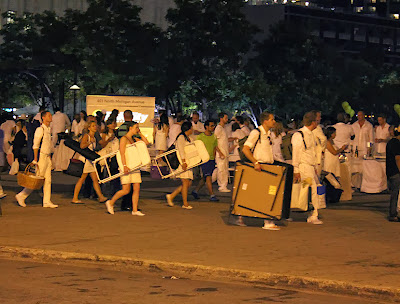 If you were anywhere near the Michigan Avenue bridge Thursday night, you probably saw women in elegant dresses improbably trundling down the street with collapsible tables and folding chairs under their arms, followed by hunter-gatherer males carrying food in everything from classic picnic baskets to see-through plastic bags.  It looked like a man's paradise, with an almost indecently favorable ratio of XX's to XY's. 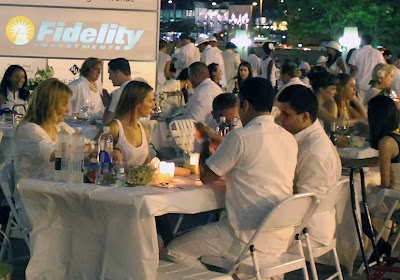 They all converged on Pioneer Court, set up their tables if they had 'em (this year the event also supplied the furniture), rolled out the tablecloths, laid out the food and candles, and transformed the plaza into the city's largest upscale outdoor dining hall.  Onlookers regarded the scene with a mixture of amusement and astonishment. 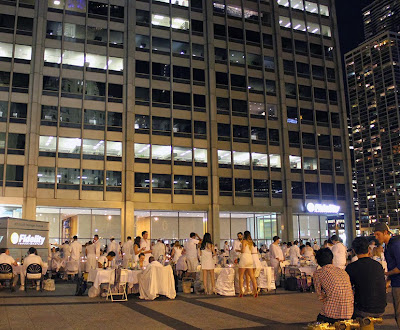 Dîner en Blanc (DeB) Chicago is the officially sanctioned version of the French original began by François Pasquier in 1988.  It now includes events in over 40 cities on five continents.  The rule was everyone dressed in white to make it easier for the participants to find each other.  People buy tickets, which usually sell out fast.   They're instructed to bring their own picnic dinner and supplies, which can be in any color as long as they're white.  Alcohol can be purchased.  Those with reservations are given the date of the event, but the location is kept a secret.  The day of the event, an e-mail or text message directs ticket-holders to one of several staging points from which a guide leads them to the actual location.  Last year's event was in the Dan Kiley-designed south garden of the Art Institute, with Lorado Taft's Fountain of the Great Lakes filling the role of world's largest sidetable centerpiece. 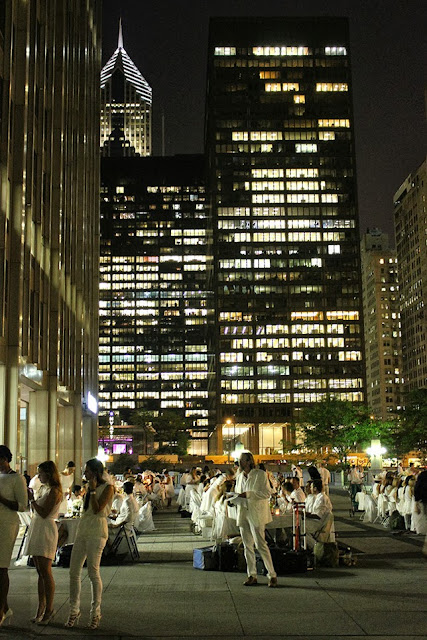 It would be hard to beat this year's setting however, with decor by Bruce Graham/SOM (Equitable Building), Holabird and Root (333 North Michigan), Office of Mies van der Rohe (Illinois Center),  Hood and Howells (Tribune Tower,) and Graham, Anderson, Probst and White (Wrigley Building). 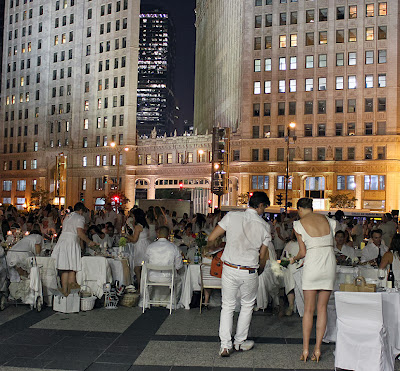 You may recall my writing about a year ago about the need to make Pioneer Court a more active Chicago civic presence.  Tonight, between the Thursday Night Football crowd at the Hood and Howells restaurant and Dîner en Blanc sprawled across the plaza on a balmy, early-fall night, it's hard to conceive how it could have been any more active.

Strangely enough, Chicago has not one, but two annual dining pop-up events.  Chicago in White, which in previous years set up shop in Daley Plaza and the Merchandise Mart, will incite its own flash mob this coming Sunday, September 22nd.

I had the privilege to do both Diner En Blanc and Chicago in White. Sadly, Chicago in white did live up to expectations. In contrast to en blanc, the location was in an unattractive parking lot behind the plumber's union in west loop. The organizers never made themselves known and the event seemed haphazardly planned and executed. Many diners enjoyed themselves because they brought good food and good friends, but I doubt they'd return unless organizers really step up their game.