The building has been sold to Thorek Hospital, which has been spending the last few years buying, bulldozing and landbanking adjacent properties.  It began with the apartment building on the corner, leaving behind a chain-linked empty lot that, for a time, inexplicably featured a solitary white plastic chair protected by traffic cones . . . 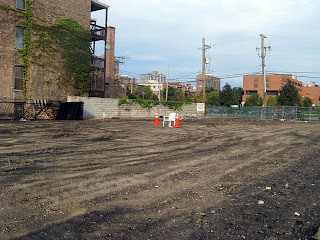 In 2011, the apartment building just north of that empty lot was torn town . . . 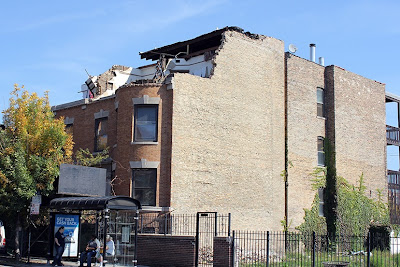 Leaving behind a very large vacant property, with better fencing and a scorched lawn. 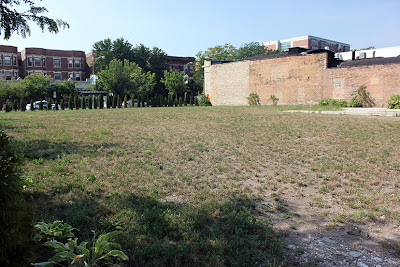 Is Nick's Uptown next in line?  Are it's days also numbered? 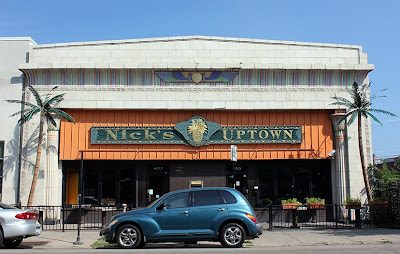 On September 8th, the Uptown Update issued a Call to Action: Landmark Status Needed for 4015-17 N. Sheridan.  The building has a long and storied history.  According to the AIA Guide to Chicago, it was originally designed by architect Paul Gerhardt in 1920 as a showroom for Hupmobile, a car company in business from 1909 to 1940.  Howard Carter's discovery of King Tut's tomb was still two years away, but the Hupmobile showroom's polychrome ornament, complete with central cartouche, indicated Egyptomania was already well underway.

After Hupmobile, but long before Nick's, the building on Sheridan was the long-time home to the Cairo supper club.  When I was a very young kid, my family would go to the dinner at the Sheridan Restaurant, just next to the ‘L stop, and in researching this post I was reminded how I was always fascinated by the exotic Egyptian facade of the Cairo, which I recall had a green storefront and a dazzling array of blinking light bulbs.  I really would have loved to check it out, if only I could have figured out a way to make a convincing fake ID for a 5-year-old.

What I would have found was a “posh” restaurant featuring steaks, prime sirloin and shish kebab, with nightly dancing and what was then considered sophisticated entertainment.  The club was known for booking hypnotists as its headliners, and when one of them didn't show up on July 7, 1961, legendary Chicago magician Marshall Brodien got his chance at the Cairo, which he described as being “like a Las Vegas showroom.”  There was candlelight, plush booths, and a bar that at showtime pushed away to create a stage.

Brodien so liked working the Cairo that he developed a hypnotist act so he could continue doing so.  His big finish was when he hypnotized an attractive female volunteer from the audience to become stiff as a board, stretched her between two chairs, and stood on her stomach. I am not making this up. See photo, page 103, here.
Brodien's time at the Cairo supper club was cut short on May 11, 1964, around 9:30 p.m., when a dozen witnesses claimed they saw a man throw a firebomb into the club,  setting off a blaze that destroyed it.   Mob involvement was suspected. One of the witnesses, 22-year-old Debra Standifer, was given 24-hour police protection.  She lived in the apartment building Thorek torn down in 2011.  It turned out incendiary material had been planted in the club at four different places.  The Cairo was just one of 34 restaurant burnings and bombings that had occured since the previous February, causing Governor Otto Kerner to appoint a special commission to investigate.

When a big building is torn down and replaced with a much smaller one, that's called “a taxpayer,” because it's there to generate income to cover the property tax bill until conditions improve enough to justify more ambitious development.
Probably Chicago's most famous taxpayer was the building at State and Randolph, constructed in 1940 to replace the just-demolished Masonic Temple Building by Burnham and Root, at the time of its 1893 construction, the tallest building in the world.
The taxpayer building that replaced it, anchored by a big Walgreen's and the Loop Theater, survived for over half a century - longer than the Masonic Temple lasted - until it, in turn, was finally replaced in 2008 by the 32-story Joffrey Tower, which has a large hole in its middle.  And a really big Walgreen's 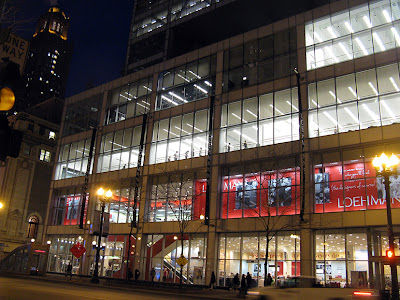 Although there's a brand new Walgreen's across the street, Thorek's neighborhood isn't quite in the same league.  The architecture of the hospital is fairly mediocre . . . 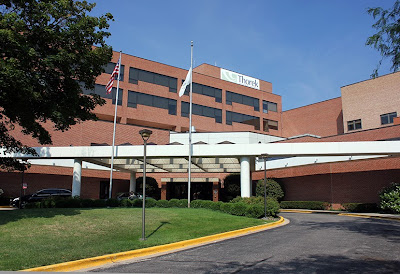 The medical building it constructed just east on Broadway is even worse . . . 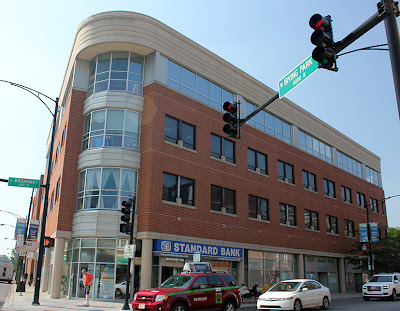 Thorek is buying up all the land for unspecified future development, but right now, there's just a lot of empty space, both the growing parched lot at Sheridan and Irving, and a big surface parking lot next to the hospital. 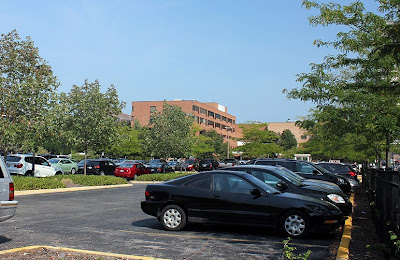 The Hupmobile showroom is the only distinctive piece of architecture in the Thorek complex.  Which means they'll probably want to destroy it.  The building is rated “Orange” on the Commission on Chicago Landmark's Historic Resources Survey, which should trigger an automatic 90-day hold should Thorek file for a demolition permit.  Uptown Update's Facebook page is talking about pushing for landmarking. 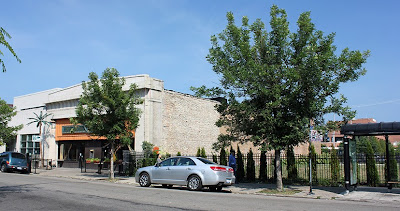 I am outraged that yet another building is under threat of being torn down because of Thorek Hospital. Their policy of buying buildings in that area and closing them or tearing them down has left our neighborhood with no chance of ever being a vibrant commercial community. Now that the neighborhood wants to move to grant this Egyptian-style building landmark status, it's almost too late. Now that Thorek owns this building, does anyone think that landmark status will be granted? Shame on our community for not pushing for this status much earlier.

Uptown is getting "souled out".
Two more demo permits....one for the Hull House theater, former home of the Organic theater, acoustically perfect theater, for condos.

If this is what the alderman and mayor are talking about for an entertainment district I am not amused and want my ticket money/vote back!

I have just been looking at property in sharm el shake, This was helpful thank you

I wish Thorek would clean the garbage up around their properties. Disappointed in another acquisition that will leave another barren space. Thanks for the article.