How I Built a Better City by Going Off the Grid: Last Days to see City Works: Provocations for Chicago's Urban Future

You have only through this Sunday, September 29th, to see a fascinating show, City Works: Provocations for Chicago's Urban Future, at the Expo 72 Gallery on Randolph across from the Chicago Cultural Center. Originally created for the 2012 Venice Biennale, the exhibition features four separate investigations of the state of Chicago's grid and its future potential.
Last Wednesday, each of the four contributors were on hand to talk about their work.  Curator Alexander Eisenschmidt noted that “What was at stake was finding alternatives to how architecture engages the city. As a collection, I'm arguing that these projects form a kind of parallel city, a city that isn't real, but that does exist in our architectural consciousness . . . sometimes more so than the ones actually constructed.”
Eisenschmidt gave each participant the exact same 12-by-3 foot tabletop real estate to work with.  In the case of architect Stanley Tigerman's Displacement of the Gridiron with the Cloister, that meant “revisiting the essential nature of the city.” After much of Chicago burned down in the great fire of 1871, a grid was imposed on the endlessly flat terrain of the city.  Tigerman explained . . .


That grid is abstract as well as realistic. It's optimistic, because it is an equivalency of a democracy of buildings. If you're building you could be anywhere in the grid.  It's also alienating, because there's no distinction, there's just the grid block after block.

In Europe, the urban model is much more hierarchical, residential quarters spinning out from a cloistered center around a cathedral or town hall.  Tigerman superimposes the cloister onto his model of Chicago's street grid through representations of buildings, many his own, that break the grid in different ways.  The traditional way of seeing the city is through the hierarchy of its grand boulevards, but Tigerman defended the grid: 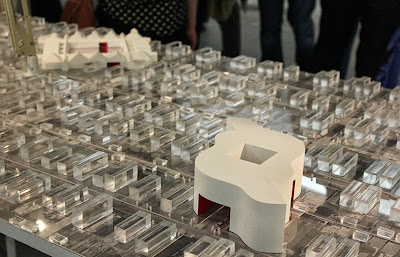 We see the downside [of the grid] in the alienation, in the sameness block after block. but that's equally democratic, and in that end if I look at it, I would prefer the grid. Everyone looks down at the side streets of - let's say - Lawndale, Woodlawn, etc., but the side streets of all of those areas - particularly in the summer - are absolutely beautiful.  Taken care of by people who are very proud of them. The most interesting for me is the side streets of the grid, and without making a value judgement that's it's better or worse- it's both democratic and alienating - they're quite wonderful for me to look at again, and I'm constantly reinvigorated when I see them.

The U of I's David Brown's Available City draws on development potential of the 15,000 vacant lots - mostly on the south and west sides - that have come to be owned by the City of Chicago, largely acquired through its fast-track demolition program for abandoned and dilapidated structures during the 1980's and 90's.  Taken together, they comprise a land area twice the size of the Loop.


The city would begin to promote the use of those lots as the basis of a kind of collective space. Individual lots . . . implemented through local community organizations.  Each one of those would have an activity, programmatic recreational, educational or other types of activities and at the same time present some kind of work opportunity.

The program would also be about . . .


encouraging private development occurring on a combination of city-owned lots and privately-owned lots, with the idea that anyone who was building could do so to a higher height, in exchange for provisions for collective space.


The first crisis we were interested in is the population loss in Chicago.  Over the past 12 to 15 years, the greater Chicago area was the only one of the top 15 cities to lose population, down to the sunbelt,  and jobs down to the south.  The crisis down there is kind a resource crisis, mostly around water. A lot of corporations use huge amounts of water in their production process.  Those companies are often where, let's say Arizona, you need an enormous amount of water, and it's very, very expensive.

A new initiative,  Chicago Sustainable Industries,  says to those companies :  why don't you move back to Chicago?  We're a very green city,  We'll work with you to change our infrastructures because we're rich in certain resources.

We took a look at the area around the [former industrial area] at Lake Calumet . . . now it's become really just these brown, empty, sometimes toxic fields.  They're just kind of leftover nothing.  They're turning into prairie. So we thought how can we change that ground, that land, that site, in a way that rethinks the grid, and the infrastructure of the grid, to work with buildings and figure out a way that the water that these companies use could be taken out of the lake, used, and then send that water back into the grid of the city itself and have the grid clean all water before it went back to the lake.

So we create a loop.  Take the water out.  Use it as much as we want.  But hold on to it.  Let the landscape and the grid take care of it and clean it naturally, using very little energy, and then send that water back. The benefit to the corporations is to get a resource that they spend billions of dollars on every year.  The benefit to the city is that they get jobs and a new kind of infrastructure that really thinks about a sustainable way of building a city.  And what the area around this renovated, revitalized district gets is, potentially, a new kind of the park system. 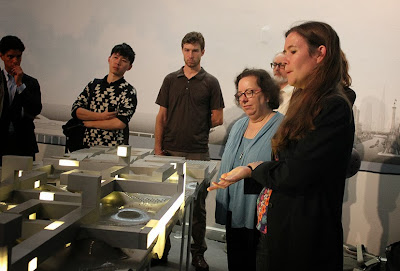 UrbanLab partner Sarah Dunn talked a little more about the idea of a “stormwater park” . . .


.  . . as a cultural attractor. These mounds are sometimes seating for an outdoor theater, sometimes places for sheep to graze.  There are tennis courts, basketball courts.  When the infrastructure is not functioning as a floodplain, it's also a drive-in movie theater. 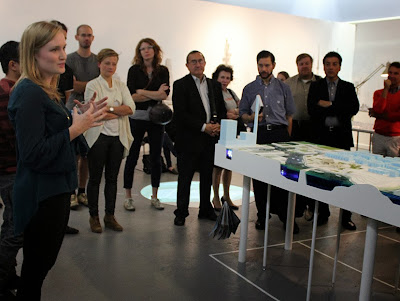 Lindsey Moyer of Studio/Gang talked about her firm's entry, Reclaiming the Edge . . .

What's included in the model is really representative of the way that we work in the office.  When we start thinking about a project, we become these research nerds and we're just learning everything about the region, the area immediately around our site, and zoomed out a little bit further.

In all these projects it was about starting to look at the water that intersects with the sites  and thinking about the condition of the water as it was at the point that we started and how we could revitalize that, and think about how it could be this lasting benefit for the city in future.  I guess in a way all of these projects are architecture in response to crisis.  In each of these sites, the water was in a condition that was not great for recreation or for habitat and we've worked with engineers and ecologists to revitalize these waterfronts and these water habitats.  Each of these sites are an ongoing exploration where the architecture becomes the first step in the process.  It is a spotlight on these sites, and can be become a catalyst in rethinking about how we think about the waterways.

The model lays out Studio/Gang's Chicago waterfront projects as a continuous - if geographically incongruous - urban terrain.  It begins with an idea - the  Reverse Effect project dealing with re-reversing the flow of Chicago river - and moves on to river boathouses and the Lincoln Park  Nature Boardwalk.  Then the proposed Ford Calumet Environmental Center, which is about  . . .


nest-making and gathering and taking all of the materials that have been kind of dumped in the Ford Calumet region and gathering those to create a building that's about how to use these recycled materials.

. . . and concludes with Studio/Gang's plan for Northerly Island . . .


about integrating with the museum campus to create this outdoor component to that circuit, where you can learn about this inland lagoon, canoe, and even dive to view a sunken ship.

The model actually descends below the water level.  Be sure to check out the tiny models of both the sunken ship and small plane lying on the lake bed. 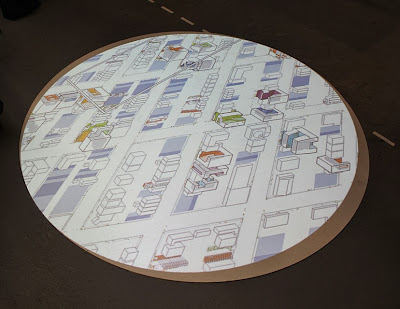 The models are supplemented by printed material stashed in, and graphics printed over the constructions, as well as circular light pods in the floor projecting illustrations and more information.

Surrounding the exhibition, on the walls of gallery, is Eisenschmidt's Phantom Chicago, in which the drawings of iconic visionary projects from the 20th century, from Adolph Loos entry to the Tribune Tower exhibition to Greg Lynn's Stranded Sears Tower . At one point, Eisenschmidt has actually placed the buildings on their own peninsulas in a realistic, if surreal, re-envisioned juncture of the Chicago River and Lake Michigan. 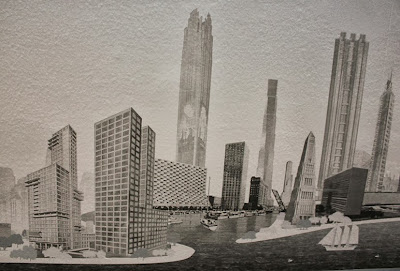 (There's also a  Chicago component on the iPhone app, Museum of the the Phantom City, which maps provides information and graphics on such unbuilt projects as the Loos and Gropius Tribune Tower entries.)

This is a great show.  Not only are the ideas behind it intriguing, but the models are rather beautiful in their own way.  They also in include some of the neatest, tiniest model people you'll ever see.  If you look closely UrbanLab's Free Water District, you'll even find horses, sheeps and cows. 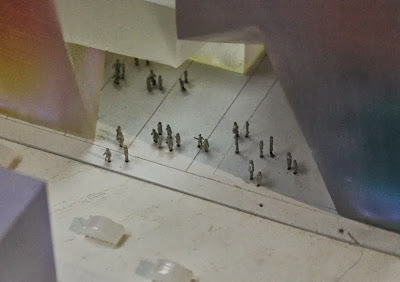