Trying to pick one "greatest" of all symphonies reminds me of the chronically argumentative parents in Woody Allen's film Radio Days, where the father bursts into the living room and confronts his wife, "Wait a minute! Are you telling me you think the Atlantic is a greater ocean than the Pacific?! "

Be that as it may, the Chicago Symphony Orchestra performance 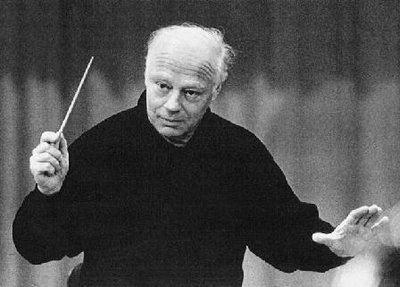 conducted by Bernard Haitink last week reminded me once again why I believe the Seventh may have no equal. To some degree, it's a sentimental choice. It was a performance of the infinitely beautiful Allegretto in a performance by George Szell and the Cleveland Orchestra that first turned me on to the power of classical music over three decades ago. (I purchased the record from a bargain bin at the old Rose records as a "cutout", marked as a discontinued, price-t0-clear title by a small round hole punched through the upper corner of the cardboard sleeve.)

All of the Beethoven's other great symphonies are mired with extra-musical associations, beginning with Eroica, with its dedication to Napoleon that the composer tore up after Bonaparte embraced tyranny. The Pastoral, with its bird calls and lightning strikes - what else needs to be said? The 9th, of course, is where Beethoven hedged his expressive bets by overlaying Schiller's hymn to brotherhood over the music of the last movement. And no one can forget how the militaristic Fifth was appropriated as an anthem of victory by both the Allies and Nazis during World War II.

Despite Wagner's description of it as "The apotheois of dance", and Thomas Beecham's likening the scherzo to "a bunch of yaks jumping about," the Seventh has escaped being compromised by nonmusical associations. It resists any tone poem-like narrative. It simply is.

The masterful Haitink/CSO performance made this crystal clear, especially in the Allegretto. In most performances it takes on a mournful, death-march quality. Under Haitink's baton, it moved briskly, as it should, stripped of sentimentality, its profound sad beauty not worn on the sleeve but flowing organically from its innermost structure. And that momentum carried through all the way to the propulsive final Allegro Con Brio, where in the concluding bars the music seemed to lock into our own bodily rhythms - pulse, breathing, brain waves - and, for a few ectastic moments, the floor dropped from beneath our feet and we were transported to a state of pure energy. No subtitles required.

I was lucky enough to see your very own Bernard Haitink conduct the seventh with the London Symphony Orchestra in New York City this past month. It was the final night of a one-week run of all nine of LVB's symphonies. The seventh has been my favorite for years and this was third time I had seen it performed. It was thrilling to see the emotion displayed by the musicians, particularly during the 4th movement as it was the last piece they performed for the program. I encourage everyone to try to witness the seventh live at some point in their life. It is something quite special.