God vs. Mammon on East Wacker 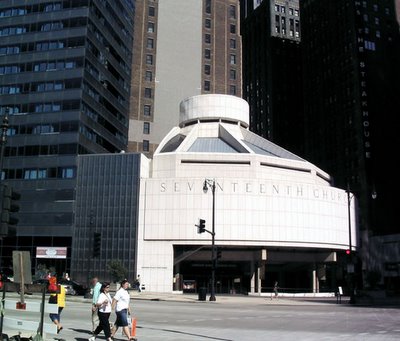 Harry Weese's 1968 Seventeenth Church of Christ, Scientist at 55 E. Wacker Drive is a perfect example of how it's often not the oldest architecture, but that closest to our time that's most in danger of destuction. It's not on the list of the Chicago Historic Resources Survey of important Chicago buildings, which doesn't anything built after 1940. The list was completed way back in 1995, and has yet to be updated, so that a masterwork like Bertrand Goldberg's Prentice Hospital remains completely unprotected. Northwestern Hospital and University have moved quickly to demolish old facilities like the neo-Gothic Wesley and Passavant Pavilions, and it's likely they've already signed Prentice's death warrant, and will dare anyone to stop them from carrying it out.

On February 17th, the Chicago Tribune reported that the developer who owns the 1928 Art Deco Chicago Motor Club tower has had problems redeveloping the property, and is looking to make the Church of Christ just around the corner part of a larger, more viable combined development parcel. According to reports, he's wooing church members to let me build over their church, or even demolish it. 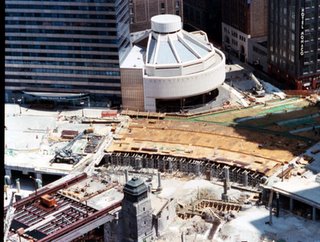 Weese's church is far from perfect - the recessed, lower level garden tends to be little more than a dark moat, but Weese managed to use concrete to create a building that carries echoes of big-boned Gothic while being completely modern. The way its curving concrete facade turns the corner and its low exposed-ribbed, disc-topped dome counterpoints the angular skyscrapers all around it make Seventeenth Church of Christ one of the most graceful buildings on Wacker.

This Monday, March 6th, docomomo-midwest, the local chapter of the global organization dedicated to documenting and preserving modernism, is taking the bull by the horns by sponsoring a lecture by architectural historian Rolf Achilles. It's free for docomomo-midwest members, $8.00 for non-members. The lecture will begin in front of the curch at 55 E. Wacker, and continue in the offices of Perkins+Will in Mies van der Rohe's IBM Building, where you'll need a photo ID to enter.

You can make reservations via email.