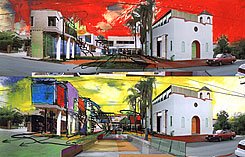 This Sunday's New York Times includes an excellent piece by architecture critic Nicolai Ouroussoff, that discusses the distinctive work of architect Teddy Cruz, of estudio Teddy Cruz. Like Orson Welle's Touch of Evil, it's a lot about crossing borders, in Cruz's case, in discovering connections between San Diego to the north and Tijuana, separated by a ten foot-high steel wall, to the south. Ouroussoff relates how Cruz has found an alternative to the affluent gated suburbs in California in a radically different concept of urbanism in Tijuana that draws on local traditions and supports the working poor.

I first came across Cruz's work in Out of The Box: Design Innovations in Manufactured Housing, an exhibition that ran at the Field Museum last year. While some critics almost disdainly considered Cruz's entry, Manufactured Site, out of place among others that attempted to rebrand manufactured housing as designer pre-fab, I thought Cruz's work really got to the point. Despite the often splendidly inventive concepts of the other architects in the Field's exhibition, making pre-fab more than a niche product among the affluent seems a long-shot battle - the predominant aspiration still seems to be as large a house on as broad a plot as the mortgage holder will allow, built preferably on virgin farmland far away from toxic center-city cores.

Cruz takes on, instead, the central problem of housing the burgeoning populations of 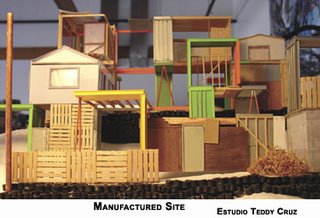 immigrant and working poor. We've seen how not to do this in the dreary high-rises of suburban Paris that became stagesets for recent riots. Rather than imposing what's best for them on populations without the economic clout to resist, Cruz draws on the methods that locals use to survive and creates an alternative that offers the choice and variety that bureaucracies seldom think the poor deserve.

As I said last March:

Cruz describes San Diego as "the Home Depot of Tijuana," from which discarded materials such as wooden pallets, garage and refrigerator doors, tarps, plywood - even entire houses slated for demolition - make their way across the border to be re-assembled into housing for the poor. Inspired by "the resourcefulness of poverty," Cruz's concept is a third-world revival of the Sears catalog house. Families would receive a kit with an assembly manual, a snap-in water tank, and 36 frames that can be placed in a variety of configurations, serve as frames for concrete poured on site, or to incorporate materials found nearby. Cruz would pair San Diego non-profits with local Mexican government officials to funnel money to the “maquiladora industry” - corporations that have built plants in Mexico to take advantage of a labor force characterized by low wages, no health care, and no unions - which would fabricate and distribute the kits, “to give back to the communities it exploits.”

The New York Times article includes a generous complement of photographs and renderings and should be up for free for at least the next week. (registration required.)