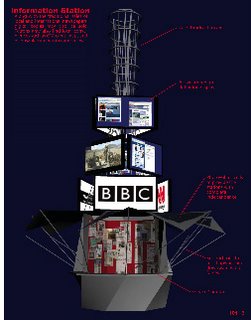 Architecture for Humanity Chicago has unveiled on its website the winners of its recent newSTAND competition to design a new urban news stand for today's new media age.

An earlier ArchitectureChicago Plus post had referred to the way the announcement did not display any of the winners, but only suggested they would be on display at a $75.00 a ticket fundraiser on April 21st.

In comments responding to the post, Civic Blueprint, which is sponsoring the fundraiser, stated that all profits from the event will go to AFH's national organization and that "We are pleased to be able to exhibit the winning entries at re:FAB but we believe that AFH Chicago has a responsibility to showcase the entries on their website as well." A second post from AFH Chicago states "It has never been the intention of AFH Chicago or Civic Blueprint to use the fundraising event as an opportunity to gain money by providing this as the only opportunity to view the submissions. The winners will be posted on the website by the end of the day." Which, indeed, they are, with larger versions of the images promised in the near future.

For own part, our initial comments were not about casting any aspersions as to where money was flowing, but a criticism of how announcing winners without publishing images as well as leaving the impression that they will only be able to seen at a paid fundraiser is not a good way to promote exceptional architecture, and we're very glad to see those images are now becoming publicly accessible. You can read the original post here, the full responses here, and see the images here.

You, as an established and respected design journalist, understand the way most competitions work. Finalists work is usually exhibited first, then within a day or so images are released online. This way you can celebrate the hard work of the designers in person and then make it public.

I believe the miscommunication arose from your suggestion that the two events were interlinked and the competition was nothing but a 'sideshow'. As you are now fully aware that the Civic Blueprint fundraiser is actually raising funds to help in the rebuilding on homes destroyed by Hurricane Katrina in addition to giving architects the opportunity to become involved in hands-on built projects. Note: the sister exhibition in Chicago of one of our clients, the Calhouns who we are supporting vie this benefit -- http://www.suntimes.com/output/hurricane/sho-sunday-fine19.html

I, as co-founder of Architecture for Humanity, am extremely proud of local chapters. They are completely autonomous and growing chapters like Chicago, New York, Sydney and Minnesota have instigated projects that have raise the debate of public architecture and begun to implement local projects that make a difference.

Your post forced the hand of a small volunteer led group to upload images, when they are trying to hold down day jobs. Had you emailed, called or even returned my phone message then you may have given an opportunity to explain how they were going to present images. Rather you suggested their efforts were "less about promoting superior architecture than serving as a sideshow in a fundraising campaign."

We should be celebrating all the hard work all the entrants and organisers put into working on this project and supporting their efforts to create better public space in the great city of Chicago. Additionally perhaps you would be willing to support the Civic Blueprint benefit as it is a great opportunity to hear a New Orleans band, bid on local artwork and for Chicagos' design industry, including its' media, to support the rebuilding efforts on the Gulf Coast.

The party is tomorrow. Lets give AFH Chicago the support it deserves and help it as it continues to mature.