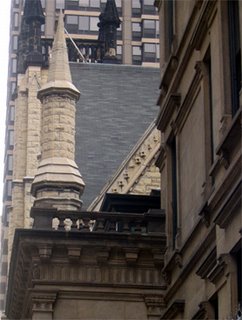 Chicago's 1883 Nickerson Mansion continues its path to rehab. Designed by the firm of Burling and Whitehouse for liquor baron Samuel M. Nickerson, it spent the greater part of the last decade as the home of R.H. Love Galleries. Later, it was acquired by Chicago investment banker, philanthropist and classical architecture enthusiast Richard Driehaus, whose firm is housed in the beautifully restored, pink-Kasota-stoned Ransom Cable house, designed by Cobb and Frost in 1886, just across the street. The Nickerson is being restored and its opulent interiors retrofitted to serve as a museum for Driehaus's extensive art collection. It is one of the last survivors of the grand mansions that were rife in what developers have now rebranded as the "Cathedral District." 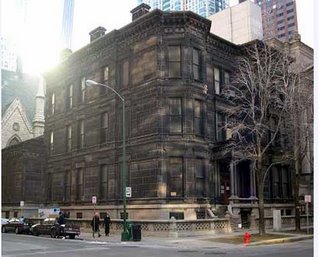 architecture. To the southwest is the aforementioned Cable House. To its north is the Victorian Episcopal Cathedral of St. James, built first by Burling in 1857 and rebuilt, after a fire, 1875, when Burling's partner was the pre-Sullivan Dankmar, Adler. To its west is the massively scaled Roman-styled John B. Murphy Memorial Auditorium, designed by flapper-era classicists Marshall and Fox in the 1920's, shoe-horned into its compact mid-block site as if it were about to burst its seams.

On one level, removing the decades of grime from the Nickerson's facades is like 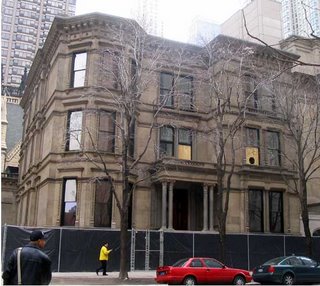 erasing the fingerprints of times past. Considering that the air of late 19th century Chicago was dripping with smoke and coal dust, it's likely that the Nickerson's sandstone exterior carried that rich patina or urban dirt for all but a small fragment of its history. Its current, freshly scrubbed state is a bit of a shock - like the skin of a baby who looks less pink than raw. Still, cleaning it up helps you be able to stand in front of the great house and imagine what it was like to experience it newly minted.