Koolhaas from Bangkok to Louisville - Never Throw Anything Away

Thumbing through Rem Koolhaas's 2004 compilation Content, I came across a section I had forgotten: "The Hyperbuilding - OMA's brief, titillating brush with sci-fi." a proposal for Bangkok, Thailand - "a city on the edge of the tolerable (which) offers the perfect context in which to test these theories." The theories are for a "self-contained city", a 1,000-meter-high "mass of thin towers and blocks of program." 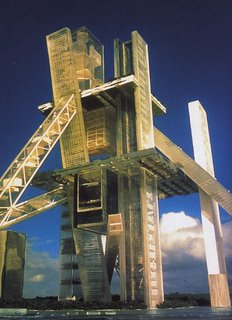 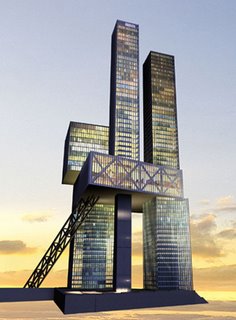 Bangkok, Thailand (left) Louisville, Ky (right)
The idea went nowhere, but Koolhaas and his collaborator Joshua Prince-Ramus are nothing if not persistent. Once they develop a theory, they kept refining it, often through several unsuccessful competitions or pitches, until they finally find a willing client. Who would have thought the client for OMA's wildly radical hyperbuilding would be found not in Tokyo, New York or China, but along the banks of the Ohio River, in Louisville, in the recently announced Museum Plaza project. It's not unlike how OMA's Seattle Public Library is a direct extension of their thinking for losing entries in competitions for a library in Jussieu and for the National Library in Paris, where the concept of floating programmatic elements within a large rectangular void can also be seen in simplied form in the Wyly Theatre project in Dallas, where programs are stacked vertically in an 11-story-high glass cube.