Via AIA Chicago's Joan Pomaranc comes word that the fall issue of the National Trust for Historic Preservation's Midwest Preservation News reports plans to demolish two buildings designed by Skidmore, Owings and Merrill's for the 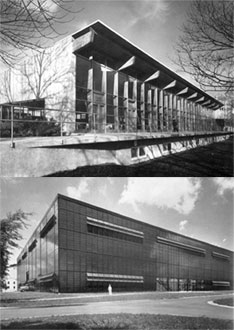 Great Lakes Naval Training Center have been put aside to investigate possible reuse. The structures were subject of a June advocacy alert from DOCOMOMO Midwest, which indicated that the Navy was planning to raze the structures, at an estimated cost of $5,000,000. According to the alert:

"Commander Tony Edmonds, executive officer of the Naval Facilities Engineering Command Midwest, told the Chicago Tribune that the proposed demolitions are part of the Navy's 15-year effort to downsize. Every year, the Navy demolishes two or three buildings as it consolidates programs and functions. 'We found these two buildings were prime candidates because they were among those that yielded the greatest payback if they are demolished, Edmonds said."

A group that included the Midwest Office of the National Trust, Landmarks Illinois, the Mies van der Rohe Society, Chicago Bauhaus and Beyond, the AIA and the suburb of Highland Park, among others, lobbied for saving the structures.

Building 42, (top picture) was designed by SOM's Gordon Bunshaft in 1942; Building 521 (bottom picture), the Gunnars' Mates School was designed in 1954 as a training facility by SOM's Bruce Graham, who had undergone radar training at Great Lakes. It was the first project Graham worked on at SOM. DOCOMOMO described the alterations made to the two buildings as "additive" and reversible.

The U.S. Navy has now agreed to permit the Great Lakes Naval Museum Association to investigate using the Bunshaft building, and the Navy itself will "investigate rehabilitation of Building 521 for use as the new base galley and club. SOM donated services to develop design concepts and cost estimates for rehabilitation, which the Navy will use to help compare rehab and new construction costs."