Is it Spire Yet? - Calatrava developer announces project team 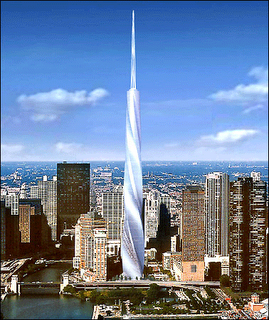 A press release today from Shelbourne Development, the Irish company that this past July took over from Chris Carley the proposed 400 North Lake Shore Drive, a/k/a the Calatrava Spire, announces a "global team" to build the proposed 2,000-foot-high residential tower. Calatrava has been signed as "lead architect and engineer", while Chicago's Perkins+Will is the project's lead architect, with Thornton-Tomasetti as "structural engineers of record." No word if they've actually sold any of the tower's extremely pricey units, but general counsel Tom Murphy, the mouthpiece for Shelbourne's executive chairman, Garrett Kelleher, is quoted in press release as saying, “We look forward to breaking ground on The Chicago Spire before June and building a property the city will look up to with pride.”
(Click on time for permalink) 12:24 PM