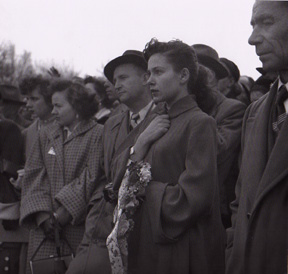 Richard Nickel's Chicago creates an moving portrait of the city and its people at mid-century, of wonders lost, and of the photographer who gave his life trying to save them.

Richard Nickel photographed ghosts. His subjects were the remains of the “City of the Century,” whose wild growth -- from 30,000 people to over a million and a half in under 50 years -- fueled the building boom that created Chicago’s early 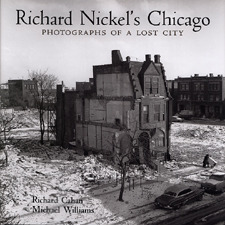 skyscrapers, its great houses, and the fantasy world of the 1893 World's Columbian Exposition. But by the time Nickel began taking pictures of Chicago in the 1950s, the inner city neighborhoods that had been the city’s pride had been panic-peddled s into slums, and by the late 60's rage piled on neglect and set the streets ablaze, while in the besieged Loop, a rich architectural heritage that was admired worldwide was decimated and discarded as if it were yesterday’s garbage. Read the rest of the poignant story - and see some of the photos - here.
(Click on time for permalink) 12:02 AM

I browsed through the Nickel book at the store last weekend -- beautiful but relentlessly sad, like Nickel's story itself.

Great essay, lynn! Nickel's photos are enchanting and sad at the same time.

His photos document the exact moment in history when the urban, thriving city was disappearing.

How I envy my father. He grewup in the urban eastside of Buffalo in the 1950s.

Though my skills will never approach a true visionary such as Nickel, his work certainly drives me to document Chicago so that the next generation can glimse backwards into the past of Chicago.

Excellent essay, Lynn. Just a guess but I'm going to guess this won't be on sale at Walgreen's anytime soon.

I wasn't aware of Nickel's story; thank you for sharing it with us. I caught a glimpse of this book zipping by the local bookshop recently -- I'll definitely get a copy the next time I go by.

thanks for posting this article. An architect involved in building the Duncan House back in the late sixties alerted me of the new book in the article. This will hopefully allow better identification of the individual architectural fragments placed in the castle-like structure/cave of house that Hugh Duncan acquired from Nickles.

Kudos on a wonderful essay...and for introducing me to Nickels. Embarassed to say I was unacquainted with him.

Richard was an amazing artist and advocate in a time when the forces of growth and development moved across the Chicago landscape with Godzilla-esque finesse and total disregard for Chicago's architectural soul.

I missed meeting him...I regret that, but I was able to study under Jachna and Thall at UIC/Columbia college in 77/78/79 and fall in love with large format B/W photography and engaging in the entire process of capturing and rendering imagery.

My son in Minneapolis..a U of M student, great amatuer photog and punk rock musician extraordinaire asked me about Nickel out of the blue last time I was up there and texted me again for his name last night right before going on stage.

I texted back Richard's name and brief accounting of the time it took to discover his remains at the old stock exchange site. Though tragic, I think if Richard Nickel could somehow reach across and give us a read on his demise he would probably say it happened while visiting an old and very dear friend.

I told my son to dedicate one of their songs to Richard...knowing him he probably did.

Years ago, I read an article on Nickel's. When I saw his photographs, it was like still frames in the mind. Images that transcend time, define time and unlike their objects, defy time. My mind races through memory at facades that have been stored only later to be destroyed. When I was young so many of these monumental building that housed Americans and made Americans that were made by Americans (born or imported) gave rise to dreams that were planted by earlier giants;gone. Chaplick