Mayne sticks it to Eiffel 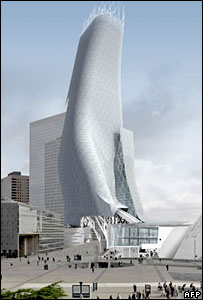 other architects, including Norman Foster and Rem Koolhaas, to win the job of designing a new curving skyscraper for the Le Defence, the Paris enclave where modernism goes to die. The tower will rise 300 meters, just 24 meters shorter than the Eiffel Tower. Costing 800 million euros, "Phare" (meaning lighthouse) is scheduled to be completed in 2012.

In way of background, here's a montage of some shots I took of Le Defence a few years ago. As you, such development has long been banned from central Paris, which has severe height limitations that have preserved the district's traditional architecture. 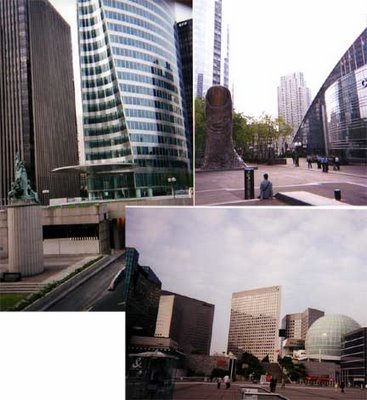 I was drawn to visit this area in 1988 seeing the bombastic version of the arc de triomphe many miles further west along the Champs des Elysses beyond its traditional section. The only good thing about this area is that it gives the modernist wannabees a place in Paris to express le ego grande.

Anyone familiar with le Tour Mountparnasse understands what the horrible alternative can be.