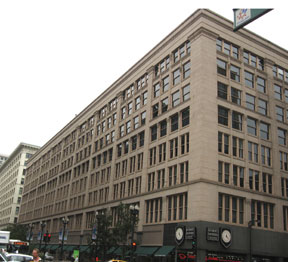 In the last decades of the 19th century, Levi Leiter, working with Potter Palmer and Marshall Field, moved Chicago's primary retail district from Lake Street to a formerly unpaved cross street so deep with mud that a yarn had it swallowing a horse and carriage whole, and transforming State Street into one of the world's great thoroughfares. By the 1890's, Leiter was landlord at both ends of the street, with Marshall Field's to the north, and anchoring the south end of department store row, Siegel, Cooper and Company, inhabiting William LeBaron Jenney's Second Leiter Building, a classic spare landmark that helped define the Chicago style of architecture.

Flash forward to another century. State Street is no longer "That Great Street". One by one, the great department stores have folded, Marshall Field's is now Macy's, and next year its once great rival, Carson, Pirie Scott, will shut down its store in the architectural masterpiece designed by Louis Sullivan. A new Sears store also hangs in there, in a building once home to the Boston Store, but by all accounts its performance has been disappointing.

And now questions are rising over what will happen to the shopping mall rising across the street from Macy's on Block 37. Just last November, the Mills Corporation threw a lavish party, complete with a pair of quick change artists and a troup of models in coveralls and gold lame, handing off their gold shovels to celebrities including Mayor M. Daley for a ceremonial groundbreaking. It was all downhill from there. 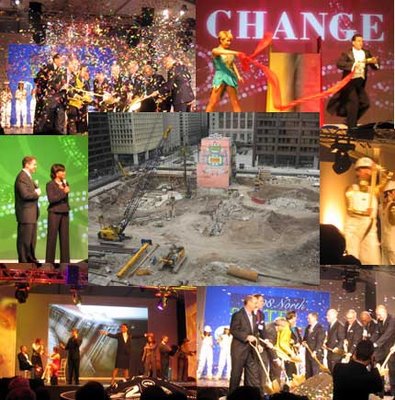 When Mills Corp. was brought in, it was seen as a great coup - a major player in retail that had created Gurnee Mills and was in the midst of several hundred-million-dollar plus developments. But almost instantly it all began to unravel, with the disclosure of financial irregularities, projects falling apart, and Mill's basically selling itself off, and dramatically reducing its stake in Block 37.

Today, Crain's Chicago Business is reporting that Mills is selling the last of its stake to Joseph Freed and Associates, the Palatine based developer. According to Crain's, it was Steve Jacobsen, who had shepherded Mills's efforts at Block 37 and jumped ship to Joseph Freed when it began to head south, who engineered the sale. With this deal, Joseph Freed now has to figure out what to do with over half a million square feet of retail space along State Street.

Five years ago, it bought the Carson Pirie Scott Building, and spent millions restoring the structure to Sullivan's original design, including last year's restoration of the colonaded cornice whose columns are steeped in Sullivan's rich ornament. The top floor behind that cornice has already been reconfigured for a new tenant, the School of the Art Institute. Now, Freed is faced with filling 250,000 square feet of space that Carson's will 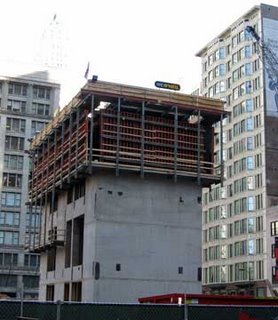 vacate early next year. With today's deal it has also taken on another 265,000 of new retail at Block 37, scheduled to open in 2008, where a new tower for Morningstar Investments is finally rising on the site of the landmark Delaware Building, whose designation was stripped in 1989's amid a mad dash to demolish every structure on the block, just so it could all lay empty for a decade and a half.

With Carson's and 108 North State, the official name of the Block 37 mall, Freed may well have the greatest influence on State Street since Levi Leiter. And in many ways, the challenge is both greater and more treacherous. When Leiter, Field and Palmer were active, they were creating State Street as a new paragon of American urban life. Today, Freed is facing a State Street that is an also-ran, a weak sister to North Michigan avenue, down for the count. Yet, the best of its architecture still speaks of greatness.

It's a tightrope. If Sullivan's great first-floor retail rooms at Carson's are filled with big box retailers with metal shelving and plastic shopping carts, it will be a desecration that diminishes the city as a whole. The challenge is to find new retail uses that both provide the kind of shopping modern consumers desire, while keeping a throughline with the street's long, rich architectural legacy. For worse or for better, and probably for decades to come, Joseph Freed will be decisively redefining what it is to be "State Street."

Sears finally woke up and turned their street level space into a Lands End store, which should increase their traffic.

Most of the buildings on the block between Adams and Monroe desperately need to be cleaned, including the Palmer House. The stores are OK but the grimy look is a turnoff.

new reader, keep up the great work, chicago needs more of a presence in the blogosphere.

Palmer House is also getting a makeover, including a significant amount of retail. There's also projects like Joffrey Tower that will add some new stores like a 2 story Loehmann's and Macy's hoping to create an upscale grocery store.

Overall, I think State Street will develop rather nicely, although it might not be as grand as in the days of all those great department stores.

However, Michigan Avenue itself is becoming more and more iffy, with all these gadget stores opening up, including a reported Best Buy (!).