As Chicago's two major dailies, the Trib and Sun-Times, seems to be in a kind of Dutch auction to see which can disintegrate the fastest, I can think of a lot things the local journalistic scene could really use, but somehow the arrival of the New York Post wasn't one of them.

Still, there it was, settled in at the bottom of the rack at the Marina City market: New York Post - Midwest Edition. 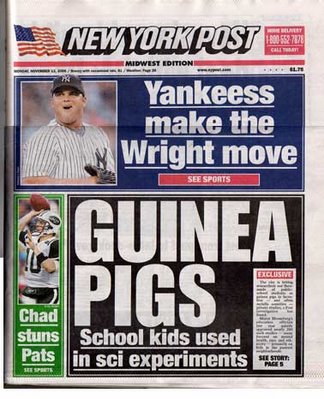 So, what's up with that? I thought we had seen the last of Rupert Murdoch when he packed up his Wingo and dumped the Sun-Times in the capably rapacious hands of Lord Black, but here he is again, with a "Midwest Edition" that looks pretty much identical to what you'd buy in New York. The Robert Novack column that ran in Sun-Times under the headline "Rout brings no reform to House GOP', runs in the Post as "GOP: Still the Stupid Party:, just a page away from "New York's Shame: Re-electing Democrats", a selection of letters to the editor that includes the insight, "My business as a police oficer picks up when the Democrats are running the show." And the issue closed so early, it didn't even include coverage of last night's Bears drubbing of the Giants.

Who's the target market for this? When you can get the daily Wall Street Journal or New York Times for a buck, what kind of idiot would spend $1.75 - oh, wait, that would be me - but believe me, it was just for research purposes. I can't see doing it again unless the Post's front page carries a headline as compelling as its classic Headless Torso Found in Topless Bar - now that's journalism.