Okay, two years in a row don't a holiday traditional make, but again this December, the Gene Siskel Film Center is bringing back Antonio Gaudi, 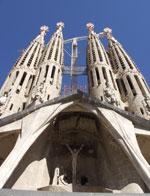 the 1985 film by Woman of the Dunes director Hiroshi Teshigahara. According to the Film Center, "Teshigahara's eye for texture, shape and sensual detail meets Gaudí's whimsy in the cinematic exploration of such masterpieces of visionary architecture as the cathedral of the Sagrada Familia." Also depicted are such Gaudi designs as the Casa Batllo, Casa Mila, and Guell Park. A newly struck 35mm print will be shown, and performances run from Friday, December 15th, through Thursday the 21st.

Also added to the December calendar is this Saturday's, December 9th, Chicago Sketchcrawl, which begins at the Auditorium Theater at 9:30 A.M. and requires only a sketchbook, pencils and a compulsion to draw, draw, draw!.