Truth in Advertising from the Chicago Architectural Club 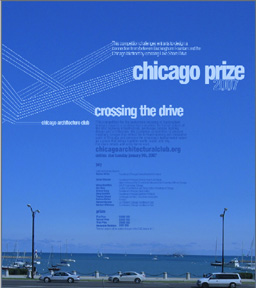 Tuesday, January 9th is the deadline for entries to the Chicago Architectural Club's 2007 Chicago Prize competition, Bridging the Drive, seeking ideas for a pedestrian crossing over (or under) Lake Shore Drive, linking Buckingham Fountain to the lakefront promenade. A surface crossing, controlled by traffic lights, was abruptly closed over the course of a single morning - without notice or hearings - earlier this year.

And lest anyone gets their hopes up that their work could actually become part of the city's urban fabric, the competition's Q&A section sets you straight:

A: The Chicago Prize is an 'ideas' competition, and will therefore not be built.

This refreshing honesty - if the explosion of wonderful entries to CAC's 2005 Burnham Prize competition, Water Tanks, is any indication - will not retard the number or creativity of submissions of the 2007 contest, but it does raise a nagging question.

And, yes, I do recognize the importance of competitions to give exposure to newer architects and fresh ideas, but why do I get the feeling that competitions like these are becoming the city's way of throwing a sop to architects and hoping they won't notice the big "Help NOT Wanted" sign for their creativity and expertise when it comes to actually tackling Chicago's wide range of design challenges, for which projects will be built?

Chicago is one of the most amazing places. This is something so enriching, so amazing.