Bertrand Goldberg's Marina City to be proposed for Landmark Designation 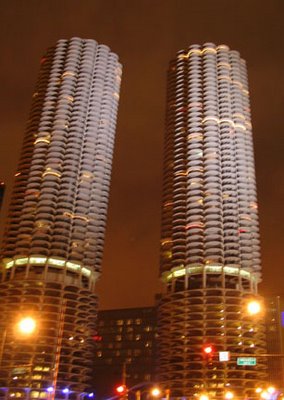 One of the most important complex of buildings in Chicago's history, Marina City, best known for the iconic, 578-feet-tall twin "corncob" towers that have become an icon of the city throughout the world. One of the first true mixed-use develoments, it included an office building that is now the 367 room House of Blues Hotel. The House of Blues, itself, occupies the complex's theater. Marina City was the starting point of the back to the city movement that has revitalized Chicago's North Loop. The original skating rink is now a Smith and Wollensky steakhouse, but the complex still includes shops, restaurants, a health club a bowling alley, and a marina on the Chicago River. In October, recreating a stunt from Steve McQueen's last film, The Hunter, a car was driven off the 17th floor and crashed into the river below for an upcoming commercial for Allstate Insurance.

This past February, all of Marina City except for the 40 floors of condos was acquired for $114,500,000 by LaSalle Hotel Properties of Bethesda, Maryland. The deal included 896 parking spaces over 17 lower floors, plus 115,000 square feet of retail and restaurants. The new owner has big plans for the complex, but its first step, has been an unfortunate repainting of the lower floors of the HOB Hotel in dark colors of the kind usually associated with back alley loading docks.

Marina City is one of a large number of essential Chicago buildings, including Bertrand Goldberg's cloverleaf-towered Prentice Hospital (which will close when a new hospital opens next year) that have no landmark protection. It clearly meets all seven of the criteria required for landmark designation:

1. Critical Part of City's Heritage - first mixed use complex, the keystone to revitalization of the city's North Loop.
2. Significant Historic Event - As if Steve McQueen driving a car off it weren't enough, it has also been home to WCFL, which battled WLS in the 1960's to define rock radio.
3. Significant Person - Marina City was the result of the teamwork of Richard J. Daley, union leader William McFetridge, and Lewis Hill to reinvigorate the city and keep good union jobs in existence.
4. Important Architecture - Marina City is one of the most iconic, instantly recognized buildings in the world.
5. Important Architect - Bertrand Goldberg
6. Distinctive Theme as a District - the original focus of the back to the city movement, and unique reinvention of Miesian principles with the freer forms of Le Corbusier, as expressed through Goldberg's own unique genius.
7. Unique Visual Feature - see picture accompanying this posting.

If Marina City isn't a landmark, no building is.

The Commission on Chicago Landmarks has three new members, and how they respond to this effort to begin to protect the city's modernist heritage will tell us a lot about the Commissions future direction and effectiveness. It will also be interesting to see what kind of stand will be taken by Alderman Burton Natarus, whose 42nd ward includes Marina City. In the past, he's been a vocal opponent of forcing landmark designation on reluctant owners, but whatever stand he takes will inevitably become an issue in his campaign for re-election early next year.

The 11:00 A.M. session on Thursday, December 7th is designed to received input for possible Chicago landmark designations. It will take place in Room 1600 at 33 N. LaSalle and is open to the public.

Hi, Everybody
I've studied English sinse this Winter .
It's very difficult for Me! Really hard!
I would like like to meet boys and girls and practisice My English with them.

I can't really do anything to help Kortny from Thailand, but I'd be curious to know the upshot of being designated a City landmark. Other than precluding some sort of teardown, how else does this affect the owners?

I am assuming that the landmark status would be for the exterior of the building only. the interior lobby for the condos have been remodeled at least a couple of times. The association was looking at possibly restoring the lobbies to their original design. They have contacted Goldberg's son to assist in documentation for this effort. We currently are limited in what we can do to the exterior of our individual balconies, ie paint colors for the floors of the balconies.

As a resident of the towers, I wholeheartedly agree with the need to landmark these buildings. Our architectural heritage is our greatest asset and the key to future property value. I'm sure HOB will fight this tooth & nail.

Any way for you to post their submission to the Landmarks Commission? Was there any attempt to rally condo owner support? It would be great for these people to hold a presentation in the tower's meeting room regarding the benefits of landmarking.

As a resident owner at Marina City, I would be thrilled if the building was designated a landmark. I am curious as to how the commercial folks will respond. Since it is a new owner, maybe they'll have a different view than that of the former commercial owners.

I moved here because I loved this building as a child and I enjoy living in such an iconic structure. Hopefully, the grand days of its celebration will return.

Wow! The spam is out of control here. Anyway, those buildings should be landmarked - as should some of the other '50's and '60's buildings in the city. 40 or 50 years is plenty of time to know if something is just fashionable or has staying power. Could any of us imagine Chicago WITHOUT Marina City?

Spam only slightly out of control. I'm resisting making it more difficult for people to post comments by forcing them to do a visual verification.

In answer to some of the questions raised here:

1. The upshot of landmark protection is that specified features of a building - usually the facades, sometimes interiors or other elements - are specified as protected. Then, if the owner wants to make changes to any of those features, it must be reviewed and approved by the Commission

2. If the Commission chooses to act on the recommendation to landmark Marina City, there will be an extended public review process with plenty of time for all parties to make their voices heard.

3. I also live in Marina City, and if some of the condo owners want to band together to make a statement in support of designation, that would certainly be useful.

4. I don't know how to help Kortny either, but Kortny's English already appears to be much better than mine.

I love Marina City. If I ever leave Wicker Park for the Loop area, Marina City would be about the only place I'd want to live.

We need to get some shots looking west toward the Riverbend building from any balcony of marina tower above the 15th floor with a clear view to the west, preferably the south s/w side of the west tower for an architectural project we are working on. There is $100.00 cash for anyone interested. We would like to do it soon as we have some really nice this time of year ( May 22, 07 ) email eric@imagefiction.com thanks

I'm all for landmark designation in the city of Chicago. Let's look south. Jeffrey Manor should be definately designated as a city landmark. I'm a member of The Jeffrey Manor Community Revitalization Committe and have researched Jeffrey Manor. Let's take close look at this area. These homes took a national home builders award for layout and construction in the 1940's.