No renderings appear to be had yet (and if you have them, please forward so I can post them), but Kevin 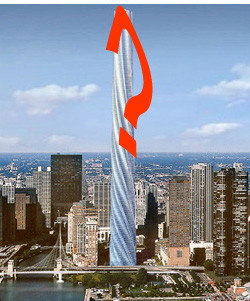 Nance, architecture critic of the Sun-Times, and Blair Kamin, architecture critic at the Tribune have stories today on another round of changes to Santiago Calatrava's proposed 2,000-foot-high Chicago condo tower. The previous iteration, announced earlier this month, bulked up the building to 3,000,000 square feet, and eliminated its namesake spire. Kamin and Nance report that a new version, that restores a taper to the top of the project, is being run past the mayor, community groups, and the city's architectural in-crowd, apparently to a very positive response.
(Click on time for permalink) 12:13 PM

That building is so hot it makes my toes curl! Cigarette anyone?

This developer is a public relations genius, maybe better than Trump.

She needs a nice hat. Without one it looks like a bad post-op tranny.