Picture of the Year? - The Coronation at Comer

If you haven't already, pick up a copy of this Sunday's Chicago Tribune and go to page 2 of the Perspective section to see one of the most spectacular photos you'll see all year. It shows half of the population of the city surrounding Mayor Richard M. Daley as he announced his bid for re-election at the Gary Comer Youth Center earlier this week.

And you have to pick up the paper to see it. On the Trib web site's version of the story, it's nowhere to be found, another demonstration of a general cluelessness about new media that has helped leave the venerable Tribune Company in the position of shopping around its own dismemberment to the highest bidder.

The thumbnail here can't begin to do justice to the richness of this photo. It's too big even for the full page width the Sunday Trib gives it; it really calls out for a double-page spread, which the editors were apparently too timid to attempt. Amazingly enough, there is no photographer's credit, although another similar shot of the event on the Trib website is credited to José Moré.

The river of humanity, in every possible variation of age, hue, and capability, overflowing that deep red background, invites comparison with Veronese, in another canvas that expands beyond portrait, to a sweeping narrative that invites us to decipher all of its myriad levels of meaning. 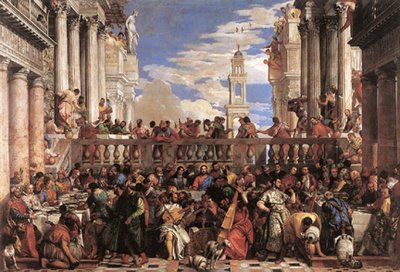 Check out John Hockenberry's fine article about the building in the current issue of Metropolis magazine.

you can also check it out online at:
http://www.metropolismag.com/cda/story.php?artid=2420