Der Spiegel, which, if the pickups on the Archnewsnow website are any indication, offers some of the best reporting on architecture in Europe, this week published Stefan Simon's recounting of the incredible story of the last project of Le Corbusier, the Eglise St. Pierre a Firminy, just outside the Loire Valley.

Conceived as part of a 1950's plan to reinvigorate the town of Firminy, it would be 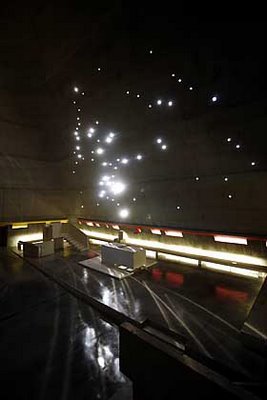 half a century before it was finally built. Le Corbusier died in 1965, the cornerstone for the church wasn't laid until 1970. It took another three years for construction to begin, and then, caught in the crossfire between politicians and abandoned by the Catholic church, it was abandoned to a fate of being a "walled-up hollow space made from rotting concrete," which didn't stop it from being declared an official landmark in 1996. Finally, in 2003, construction resumed when the church was designated "a prestigious regional project," skirting the ban of government support for church buildings by declaring LeCorbusier's design to be part of the nation's " "architectural legacy." (Could there be a lesson here for the reconstruction of Adler and Sullivan's K.A.M. Pilgrim Baptist Church, gutted by fire last January?)

The church is finally complete and open to the public, although still unconsecrated. Here's how Simon describes it, "A cone of fair-faced concrete -- a kind of pointed tower with rounded edges. A cube and a cylinder jut, chimney-like, from the slanted roof. The building resembles the cooling tower of a nuclear reactor or the raised platform on a submarine."

As you can see from this photo (and the two others on the Der Spiegel webpage), it's a lot more beautiful than that description would suggest. "On the eastern side of the building," says Simon, "light falls through 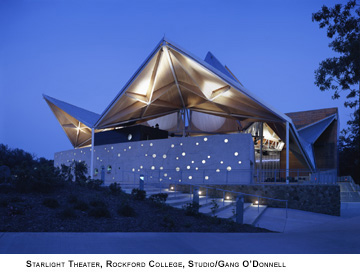 three dozen fist-sized openings. Massive perspex cylinders, built into the 22 centimeter (8.6 inch) concrete wall, form the constellation Orion." It's a striking antecedent to the porthole windows Rem Koolhaas punched through the concrete walls of his convention center in Lille, and to the constellation wall at Jeanne Gang's Starlight Theater in Rockford, Illinois. (There's also a practical side to this. Square holes and their corners create more stress; the round ones allow the surrounding concrete wall to be lighter.)

On The New Republic's Open University blog, Chicago's Richard Stern [great interview with Stern here, but watch out for the incongruous forced soundtrack - scroll down to the "off" button on the left hand side] offers up his translation of the last poem of Rainer Maria Rilke, written just two weeks before his death from leukemia in 1926. Sterns writes in response to John Banville's review in the current New York Review Books of a new book of the correspondence between Rilke and Lou Andreas-Salome, the Russian born writer who entranced both Rilke, Friedrich Nietzsche, and , later, Sigmund Freud, who is said to have portrayed her, romantic devil that he was, in his paper On Narcissism.

"He had never asked the name of his illness," Banville writes of Rilke, "and his doctor had not told him. . . . 'Help me to my death,' he said to Nanny Wunderly, 'I do not want the doctor's death, I want my freedom.'" Rilke refused morphine; his resolve was to remain concious and aware during his own extinction.

It's that experience that Rilke captures in Komm Du, Du Letzter. The translation by J.B. Leishman that accompanies Banville's review is dismissed by Stern as "anti-english", and the line he quotes is, while perhaps correct, also tone-deaf and graceless.

...the wood no longer can abjure
agreement with that flame which you're outthrowing

Stern translates it as:

the wood that long resisted
the flame you feed

Being only barely coherent even in English, I'm not the person to tell you how faithful Stern's translation is to Rilke. The original text is in The Review, so you can judge for yourself. I can say that Leishman's translation scans as if it were created by computer - DOS based, I would imagine - while in Stern's I hear that unmistakable voice of the author of the Duino Elegies, sharing his final moments with us, not with metaphysical evasions, but in quiet intimacy, clear-eyed and heart-piercingly human. Read Stern's full translation here.

I think you meant to say that Firminy is just west of the Rhone valley, rather than the Loire. A minor point...

fantastic job that jose oubrerie did on seeing the project through. especially with all the adversity...he was a great professor as well

For more information about the churches by Le Corbusier see:
http://www.tu-harburg.de/b/kuehn/lec5.html

You and your readers might be interested to know about Lost Son, the new novel based on Rilke's life and work.

Find out more, and read ongoing posts about Rilke, at: