Yes, today marks the opening of the long awaited opening of The Simpsons Movie, and so after this weekend the Kwik-E-Mart returns to the realm of the cartoon. For the next few days, 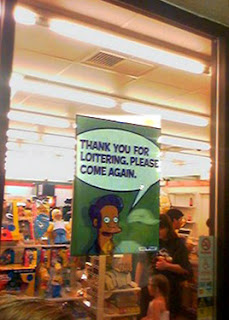 however, you can still visit one of only 11 Seven-Elevens in the U.S. that have been transformed into replicas of the legendary convenience store in the long-running series. So here's a few photos from our roving correspondent Nora Fitzpatrick from Apu's Chicago Brigadoon, at 6754 W. 63rd Street.

As reported by the Chicago Tribune, manager Frenko Rahana has temporarily been taken over by the spirit of Apu, answering the phone using his name, and, just like in the series, telling each departing customer or shoplifter, “Thank you. Come again.” The Kwiki-E-Mart is stocked with all products Simpson, from KrustyO's cereal ("Now with 20% more air"), Buzz Cola, and pink (or Pepto-Bismal, in the words of Trib writer Charles Leroux) frosted Sprinkilicious donuts 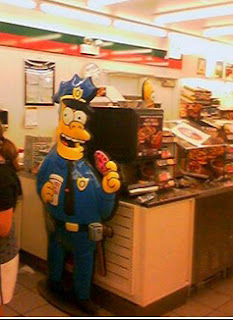 which the Wall Street Journal reports are flying off the shelves at the L.A. Kwik-E-Mart at the rate of 4,000 a day. 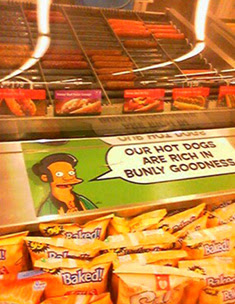 exhibition, From Concert Hall to Maximum Security, Paradigms of Virtual Architecture, to be curated by Joe Rosa for the Art Institute. (just kidding . . . I think.)