The Architectural Record has just published its list of the top 150 architecture firms, ranked by revenue, and it would appear that Chicago's stake as a major player in American and world architecture is going the way of that whole "hog butcher to the world" thing.

At the top of the list is Gensler, with over a 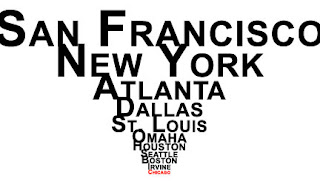 half a billion dollars in 2006 revenues. Although Gensler has a major presence in Chicago, its headquarters city is elsewhere, San Francisco, just like two other major firms that we tend to think of as Chicago operations, Perkins + Will (5th place, $268.3 million), number five on the list, but based in Atlanta, and - right behind- Skidmore, Owings and Merrill, (6th place, $195 million) which, as recent management changes have made abundantly clear, is essentially run as just another outpost of the New York mothership.

When you break it out by city, according by my quick, rough analysis, San Francisco again comes out on top, with over $1 billion in revenues spread between 6 firms, followed by New York ($759 million, 13 firms), Atlanta ($600.million, 8 firms) and Dallas ($412 million, 3 firms).

And where does Chicago rank? How about eleventh, with $168 million dollars in revenue, and 5 listed firms, behind such rivals as Houston, Seattle, Irvine, and, as ID'd by Carl Sandburg:

(All the coaches shall be scrap and rust and all the men and women laughing in the diners and sleepers shall pass to ashes.)
I ask a man in the smoker where he is going and he answers: "Omaha."

OK, OK, I understand the difference between quantity and quality. I know most of the stuff from the hyper successful firms is more likely to set an accountant's heart aflutter than those of critics or general public, but still, there's something to be said for being in the arena, and AR's list reminds us that, whatever the power of our architectural legacy, and with Chicago's current crop of extraordinarily talented younger architects still largely shut out of major new commissions, our pretensions to current importance tend not to travel much beyond the six-county area.

By the way, the award for best name has to go to Looney Ricks Kiss, which is a highly successful firm in Memphis - and not, need I warn my more salaciously-inclined readers, a contemporary variation of the Venus Butterfly.

Even though P+W and SOM are HQ elsewhere, how many of the projects (and $) are coming from the Chicago offices? It seems like every Chinese or Middle Eastern supertall or masterplan is done by SOM Chicago.

With Adrian Smith ousted from SOM, his new firm will take away from SOM/Chicago middle eastern or Chinese projects...its the design of any supertall project that wins the commission..SOM has inferior design talent these days...

The firms that win the revenue race usually have significant public contracts, and this city and state aren't doing much of anything outside of road repairs. Being broke may have something to do with that.

The only icons built in Chicago anymore are Herculean parking garages. Very few projects in the last 5–10 years have made it to Architectural Record, and when they do, it's usually some young architect designing an interior space using "green" materials (read: rubber, garbage or some other icky material) or an aging starchitect racing to build a supertall residential or UFOesque college building.

The Harold Washington Library just may have been the final nail in the coffin of any period of Chicago leadership in architecture. It's a horrible backwards looking design that helped usher in da mayor's era of orange-red brick and fake wrought iron; and it also re-wrote the rules for acquistion of architectural services and turned it into just another bean counter's line item.

As a former SOMer, it is clear to me that Adrian Smith's impact on that office is grossly overstated. Most of the best SOM project from the last ten years were largely designed by others in the Chicago office, even if Adrian's name ultimately gets put on them. Gordon Gill is actually a bigger loss for SOM Chicago in terms of "design talent", but Adrian definitely pulled in the revenue.