Mayor Daley: I Will Go to Dubai (It Could Happen)

Only Al Gore stands between Chicago Mayor Richard M. Daley and top billing on the roster of speakers the Chicago-based Council on Tall Buildings and Urban Habitat has just published for its 2008 World Congress, Tall and Green: Typology for a Sustainable Urban Future. Oh, wait, Gore and Daley are listed as invited, as is London mayor Ken Livingstone. Is this a speaker list or a prospectus? You should know I, also, am holding a big party of my own next March, with Barack Obama, k.d. lang, Alfred Brendel, Kathy Brock, Fergie, Jay-Z, the Empire carpet guy, and Gandhi among the invited guests. Prime sponsorships still available. 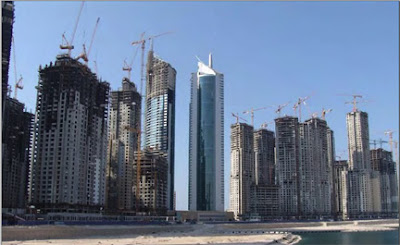 But back to CTBUH's Congress, which is taking place next March 3rd through the 5th, in Dubai, perhaps the world's most explosive boom town. A city whose metro area numbers not much more than 1,500,000 inhabitants, Dubai boasts, according to Emporis, over 60 towers 300 feet or higher, 11 of them over 700 feet tall. Add to the mix the 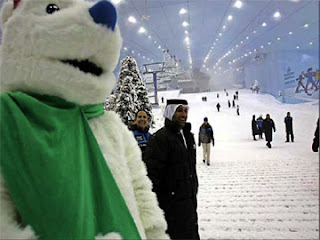 world's largest indoor ski slope, "Dubailand", the world's largest theme park - complete with life-size dinosaurs - and a 59-story rotating skyscraper, and you have to hold onto your head to keep it from spinning. Check out CTBUH's Dubai profile, from which these images were taken, for a better feel of how surreal this place can be.

the World’s Tallest”, the Burj Dubai, the megatower whose ultimate height remains a closely guarded secret, (although Emporis is listing an unconfirmed figure of 2,651 feet) and Aqua architect Jeanne Gang, speaking on “Tall Buildings that Relate to Place.” Other luminaries slated to appear are Werner Sobek, Leslie Robertson, and Ken Yeang. You can see the full current list of papers and presenters here.

CTBUH's is promoting the event as a Carbon Neutral Congress. A portion of the registration fees for the conference will go toward the purchase of green indulgences through Climate Care to offset the copious amounts of CO2 spewed into the atmosphere both from the conference itself and from the all the travel - I would guess no small portion of it on private jets - to and from the event.

While Dubai is the site of some of the world's most spectacular new structures, from 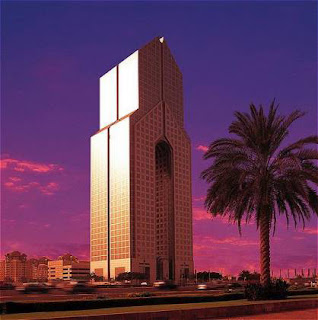 the pictures on the conference website, most host hotels look more like refugees from the land around O'Hare, exponentiated. An exception is the five-star Dusit, which resembles a double-stacked Monopoly game piece, clad in glass and stretched to a 40-story height. Pass GO at least three times if you expect to stay here. Bewarned, however, that it doesn't look as spectacular during the day as it does in the perfect sunset shot you see here. For the economy-minded among us, there's the $140 a night Arabian Park, done up in perfect Howard Johnson modern.

So will Daley take the bait? Compared to Grand Beach, which can still be a frosty in March, I hear Dubai is lovely that time of year, (73 to 92 degrees, on average), and "Shopping is something of a national past time." If Lori Healey starts talking about building a chain of islands in Lake Michigan that resemble a map of the world, you'll know he probably went.

You can place your own reservations on-line here.