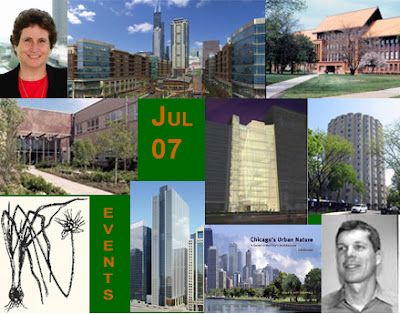 It's summer, and the pace has slowed - the month doesn't really start until July 10th - but there's still over two dozen items on July's calendar of architectural effects, starting out with Doug Farr at CAF, and Helen Kessler at Women in Planning + Development Chicago. There's green bungalows, Peter Kindel on completing the "Last Four Miles" of Chicago's lakefront at APA, TOD and the CHA's Plan for Transformation, Mark Sexton leading a tour of the new Spertus Institute for AIA Chicago, and Sally A. Kitt Chappell signing copies of her new book, Chicago's Urban Nature, again at CAF. Plus the massive new Roosevelt Collection development in the South Loop discussed by RTKL for Friends of Downtown. There's even audience participation at the Preservation Onions, where Landmarks Illinois will select the most rank preservation fiasco. (Unfortunately, there's no shortage of candidates.) And, as they say, much, much more. Synchronize your calendar and check it all out here.
(Click on time for permalink) 12:01 AM