Xefirotarch on exhibit at the Art Institute of Chicago 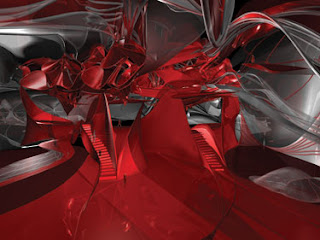 at his former SFMOMA home.

The exhibition Xefirotarch, which opened Thursday, showcases the high concept digital work of Argentinian architect Hernán Díaz Alonso, who founded the firm in 2001. In the words of the press release:

Díaz Alonso is greatly influenced by much of a broad range of visual practices, 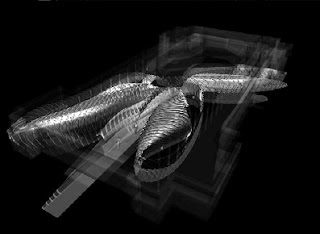 including the art of Francis Bacon and Matthew Barney, science fiction films, and digital practices in design, architecture, and art. His aesthetic, always sensual but often grotesque, evolves through a series of conceptually linked projects and experiments, with the ultimate goal of offering not only a spatial experience, as one would expect from architecture, but a temporal experience as well. Thus the resulting work occupies an as-yet undefined domain that lies between the formal demands of architecture and the narrative possibilities of different uses of space.

Díaz Alonso worked in the firms of both Enric Miralles and Peter Eisenman.
His passion for complexity makes him a good match for Rosa's infatuation with the theoretical. (Xefirotarch's amazingly complex website has to include instructions for its use.) 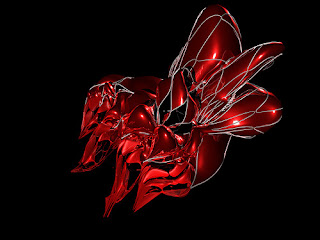 Read an extended interview with Díaz Alonso in Archinect here, and the architect in discussion with EMERGENT's Tom Wiscombe in a 2006 Architectural Record podcast here. In a 2001 interview, Díaz Alonso said:

Which gives him another another seven years in which to play - he doesn't hit 45 until 2014.

Xefirotarch is on display in the Art Institute's Gallery 227, where it runs through October 28th.

How about instead: The Art Institute may be getting over their not-invented-here philosophy and appears to be willing to present exhibitions that they could not have afforded to develop in-house.

How can this be bad for Chicago?

How about this: Instead of getting important, intelligent exhibitions, whether invented here or elsewhere, we're getting someone else's leftovers because they're cheaper than doing something original.

Does not the exhibit reflect the taste of the AIC officials. The content of the exhibit (which I think is a waste of plastic and glue) is a separate discussion from where it was created. Shouldn’t we appreciate that AIC did not spend big bucks creating the show from scratch.

If this show is representative of what the new curator did in SF, then I think we can expect to see more. It seems unlikely that Cuno & Co. would have hired someone and then said “we like your work, now change.”

im not understanding your resentment, i guess... besides the xef. show.. what else was a prepackaged exhibit?

the garofalo show was new. the young chicago was new. the show opening in december is new. whats wrong with bringing a show he spent time creating as a stopgap between original exhibitions?..how many "original" shows does the ARTIC have in its other departments? dont they just card out monet all the time..or the Jeff Wall show, brought from moma? at least the xef. show was rosa's curation..

I also can't see this as being a bad thing - not everyone would have seen the original exhibit anyhow. Not to mention all of the money and materials spent on developing an exhibit, it should be re-used.

I would consider myself fairly traditional when it comes to architecture, but I found this exhibit very though provoking. I'm pleased I had an opportunity to view it when I was in Chicago visiting. Its one thing that keeps popping back into my head as I continue to process what I saw while wandering around the city for 10 days.

I enjoy viewing work such as this because I believe (although not necessarily always practical) it fosters a dialogue that is important in current and emerging architecture.