This week is your last chance to catch West is East is West/Mies van der Rohe, Swiss architect and writer Werner Blaser's exhibition of ten pairs 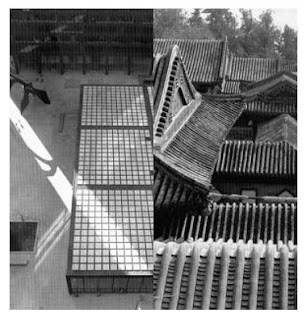 of large photographs that links the visual ethics of Miesian modernism with that of traditional Asian architecture.

On the left of each pair is a view of a Mies building set next to a shot of an older Asian counterpart. An entry in Mies' Barcelona Pavilion is placed next to the "Moon Gates" of the courtyards of the Imperial Residences in Beijing. An overhead shot of Chicago's Federal Center, displaying the Miesian grid expressed through every horizontal and vertical element of the complex and its buildings (with Calder's Flamingo an anarchic interloper) is matched with a shot of freer, but still geometrically rigorous Asian rooftops. The juxtapositions jump-start contemplation of the most fitting expression of essential architectural concepts - portal, garden, inside/outside, concealed/revealed, open/contained among them.

The exhibition is on display, admission $5.00, in the center core of Mies' Crown 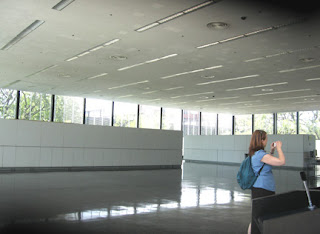 Hall, 3360 South State on the IIT campus, hours 10:00 a.m. to 3:00 p.m., through Sunday, July 29th. An added attraction is being able to see the gloriously restored Crown Hall during summer break. Soon to be crammed with drafting tables and the work and models of students, it's now completely empty, in full temple of modernism mode, the great expanse of light-filled, uninterrupted space serene and unsettling at the same time. 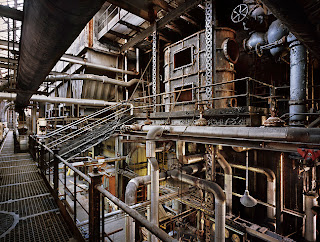 Also closing this week, on Saturday, July 28th, is Powerhouse: The Photographs of Darris Lee Harris. The title pretty much says it all - striking depictions of industrial architecture in both big picture and detail. The show is up at the ArchiTech Gallery, 730 North Franklin, open by appointment and on Thursday, Friday, and Saturday, noon to 5:00 p.m.