consisting of the usual tarting up of something beautiful in a marketers desperate stab at pursuing what they believe is contemporary taste (elevator signage a la Mr. Magoo in size and brightness, divans struck together stadium bleacher style and bronzed like cheap watches), to be followed, a decade or two down the road, by - at enormous expense - ripping out all the trendy "improvements" and putting everything back the way it was, as future owners come to realize that maximizing the building's value depends on preserving the integrity of its original vision.

Lesser down on the architectural food chain, I offer you the story of architect Alfred Alschuler's 1912 Thompson Commissary Building, at 350 North Clark Street, just 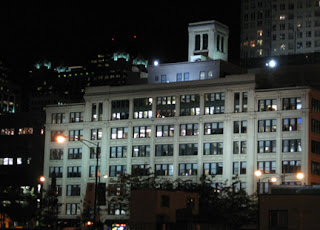 north of the Reid Murdoch, an elegant survivor that's been serving as the headquarters for Mesirow Financial. Built for the once prosperous but now forgotten Thompson restaurant chain, its faced all in cream terra cotta, with garlands of fruits, vegetables and grain, rendered in glazed clay, as the most prominent ornament.

For years, Mesirow and Friedman Properties thought enough of the structure to bath its facades in floodlights at night. Now, with a 40 story skyscraper, designed by Lohan Anderson, with A. Epstein and Sons as architects of record, rising across the street to serve as the new home for both Mesirow and the law firm of Jenner and Block, fleeing Trump's shadow on the IBM, the Thompson Commissary Building is being treated with less than kid gloves.

Recently, the vaguely limestone-looking concrete that replaced the terra cotta just above sidewalk level is 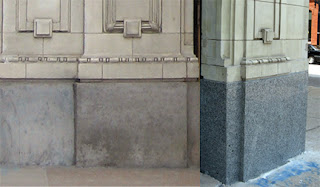 being replaced, in turn, by slabs of polished granite. And while you'd think a finely finished stone would beat a crudely surfaced expedient hands down, the new "upgrade" is jarringly ham-fisted. While the smudgy former material somehow blended in with the terra-cotta above, the granite sticks out like a sore thumb, its stiff textured hardness inserted like a foreign object into the soft uniform contours of the terra cotta. It doesn't make the Thompson look "modern" - only confused. 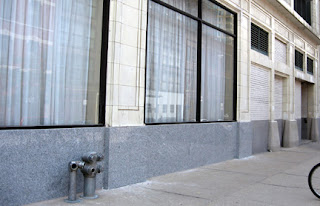 The Thompson Commissary Building has no landmark protection - it's rated Orange, for potentially significant, on the Historic Resources Survey. The cynic in me wonders whether the new granite is a step towards compromising the Thompson's "architectural integrity" - a crucial criteria in evaluating if a building merits landmarking - should the Thompson stand in the way of still another River North megadevelopment.

POSTSCRIPT: This whole historical restoration thing is more complicated than it seems. Read the shocking things I later learned about this project here.

I have never heard of the Thompson restaurant chain. How large was the chain? When was its heyday (I'm guessing around 1912)? Does it survive in any form today?

What was the commissary building used for?

Spot on commentary, by the way.