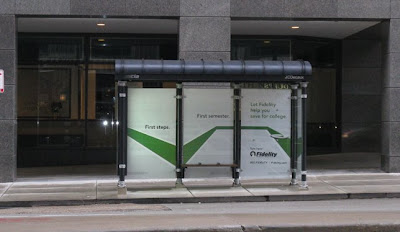 Advertising is a wonderful thing, but sometimes, as someone once said whose name momentarily escapes me, less is more.

We've gotten used to the heavy-limbed Robert Stern bus shelters that have popped up all across the city, part of a 2002, twenty-year deal the Daley administration reached with the Paris-based street advertising behemoth JC Decaux that's slated to bring in $300,000,000 in revenues.

Decaux currently claims in excess of 3,000 "advertising panels in the best locations . . . 24-hour backlit . . ." Now, without increasing the number of shelters, Decaux appears to have found a way of more than doubling the available ad real estate by now placing ads not only on the two, shorter, end panels, which has been the standard until now, but also across the full length of the wide panel in the back.

Our roving correspondent Bart Swindall tipped me off to the new layout you see here, on a shelter on LaSalle just south of Wacker, and I've seen them in other locations, as well. Could it be a start of a trend? 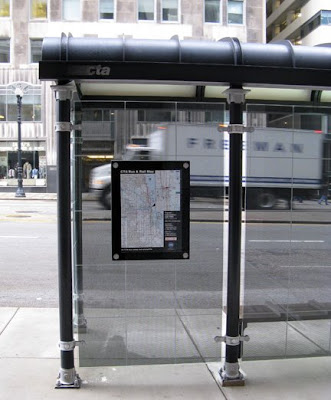 No doubt Descaux and the city would argue the new panels, with their mesh transparency, is no worse than the ones you see on the CTA, but to me those panels make looking out a bus or "L" car window like seeing the world through cataracts. Somehow, I doubt this added clutter benefits anyone - not the streetscapes, and not even the advertisers, whose message stands to fade more and more into the background once the initial novelty wears off and the Cinerama-shaped ads become so much unseen visual street noise.

eltodesukane said...
This comment has been removed by the author.
12:35 AM

Another typical bus shelter with the walls nor reaching the floor nor the roof. Not good in cold wintry weather. Bad design.