Yes, it never ends. Here's six more events we've just added to the May calendar, and no, it only seems that the only two things anyone has an interest in are Burnham and the 2016 Olympics.

This Tuesday, May 12th, they'll be a 6:30 p.m. panel discussion, Telling the Story of Public

Housing: Competing Narratives and the Role of Journalists, co-sponsored by the National Public Housing Museum, at the Chicago History Museum.

Numbers, the Golden Rectangle, and Geometry in Nature at the Hafele Chicago Showroom. On Friday, the 15th, architect Thom Green talks about his Unbuilt Projects and Fantasy Architecture at the Edgewater Historical Society Museum.

But back to our dual obsessions:

On the morning of Wednesday, May 13th, Cassandra J. Francis, Director, Olympic Village Development, Chicago 2016, Olympic and Paralympic Bid, will discuss Planning the Olympic Village, at the University Club for the Goldie B. Wolfe Miller Women Leaders in Real Estate Initiative.

On Tuesday, May 26th, Edward H. Bennett III and Arthur H. Miller talk about Burnham's Recruiting Bennett for the Plan of Chicago for the Chaddick Institute of Metropolitan Development, at the Cliff Dwellers.

. . . and on Wednesday the 27th at the CAF, you can hear Daley stalwart Lori Healey, currently

Chicago 2016 President, spin why there's no absolutely alternative but to immediately smash every Reginald Issacs/Walter Gropius building on the Michael Reese campus to make way for the Athletes Olympic Village that will, of course, not be needed until 2016, seven years away. She'll be interviewed by Lee Bey for an event titled: The Chicago 2016 Olympic and Paralympic Bid. 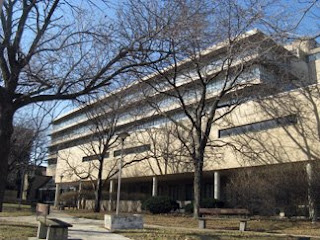 and form your own opinion next Sunday, May 17th, with the Architectural Tour of the Michael Reese Hospital Campus and the Threatened Works of Walter Gropius, which kicks off 2:00 p.m. under the brick archway spanning 29th Street at Ellis Avenue. The tour is co-sponsored by the Gropius in Chicago Coalition, Chicago Bauhaus and Beyond, and Preservation Chicago. The tour is free, but there's a suggested $10.00 donation to offset costs of continuing research.

Just this week, there's also Adrian Smith at CAF, a lecture on the history of streetcars by the

CTA's David Wilson for APA Chicago, and John Lupinos talking about the new Nichols Bridgeway to the Art Institute's soon-to-open Modern Wing, also at CAF. In all, I counted some 17 events this week alone, and that's not including the over 100 tours this Saturday as a part of this year's Great Chicago Places and Spaces.

Check out all the events on the May calendar here.