Their beauty was apparent even as I took pictures of them this past winter against the stark, naked branches of the leafless trees, but taking the tour given by scholar Grahm Balkany of the Gropius in Chicago Coalition Sunday afternoon, and revisitng the Bauhaus-inspired buildings on the Michael Reese campus now embraced by the lush foliage of the landscaping - and especially the stunning parks created by Hideo Sasaki - the full extent of the outrage the city seeks to commit by erasing all trace of the complex to create a tabula rasa for a developer-to-be-named-latter for a billion dollar athletes village for a still-to-be-awarded 2016 Olympics became painfully acute.

We'll be writing more about this later - you can read my original story here - but for now here are a couple of brief excerpts from Balkany's incredibly informed and exhaustive tour of the wonders of the campus:

And here's a photo of the sunscreens on a building where Gropius's involvement, working with Reginald Isaacs, and Loebl, Schlossman and Bennett, is fully documented, the wonderful Kaplan - originally Private - Pavilion, which reimagines the Bauhaus building in Dessau through the roots of Chicago architecture. 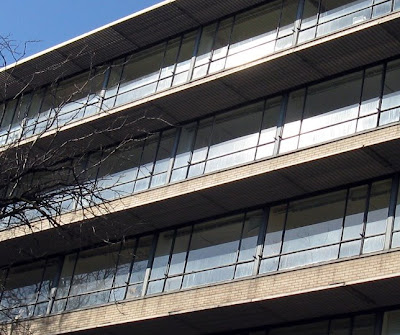 Notice how the ribbon windows are actually a derivation of the original Chicago Window, which consisted of a large fixed central pane, with smaller, operable windows on either side. In the Kaplan, the pattern becomes more complex, with the smaller windows repeating in both doubles and quadruples. Although it provides a real sense of animation to the facade, it's anything but arbitrary. The groupings of four center on a drywall partition; those of two appear before structural columns. And the pattern becomes even richer with the windows split into upper and lower strips.

Much more later. For now, time is short. The buildings are already being trashed and vandalized as the interiors are stripped of furnishings. The Illinois State Preservation Agency has initiated a review of the complex's historic status, and one of the ways you can do your part is by writing a letter supporting preservation. Details here.

This is a fascinating subject - when will Mr. Balkany be conducting his tour again? Thanks for the report; I am so happy attention is being drawn to this important matter.

I was also on the tour and the buildings are remarkable. With imagination and selective demolition they could be remade into a stunning olympic village. I just hope someone at the city has the creativity and vision to see that.

I have gone on a tour of the Michael Reese campus, and having seen the buildings, I believe they are a very important part of architectural history. The proximity, both physically and chronologically, between Reese and IIT is very important. It is fascinating and instructive to see two very different strains of the Bauhaus built at roughly the same time and within a mile of one another. The non-Gropius buildings are also excellent examples of the modern design that flourished in Chicago for 30 years after WW II. The buildings themselves, and the gardens and spaces in between them, are beautiful and are of a unified language and should be preserved. Most importantly however, the adaptive reuse of the hospital campus would create a spectacular Olympic Village. There is plenty of room on the perimeter of the site to build enough units to house the athletes. The existing buildings at the core could be reused for both common spaces and residential units. This is true sustainability. The City of Chicago needs to show some imagination in putting together the plan for the Olympic Village. The demolition of these building will be viewed in 30 years as the equivalent of the demolition of the Sullivan and Chicago School buildings that occurred in the 1960s. We should try to learn from history. I urge anyone who has no seen the Michael Reese campus in person to visit and see for your self. I commend Preservation Chicago for their work on this issue.