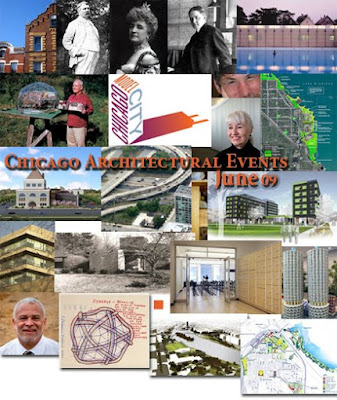 By the end of the month, people will be heading out to the beach and events get scarce, but until then, we've got 60 - 60! - architecture related events on the June calendar.

There are receptions for new exhibitions: Model City, at CAF, David Woodhouse Architects, at I Space, and Daniel Burnham's Vision of an American Metropolis, at the Newberry Library. Again at CAF, Grahm Balkany talks about the Walter Gropius legacy at the Michael Reese Hospital that the city's hot to destroy. (The campus has now been sealed off so people can no longer see what they'll be missing: surprise, surprise.) And then there's this year Canstruction at the locale formerly known as the Apparel Center. Could this be the year we'll see Trump Tower realized in tuna and sardines?

Check it all out - and decide for yourself what you can't miss before you bundle the family and its pets into the Rambler American . . . here.