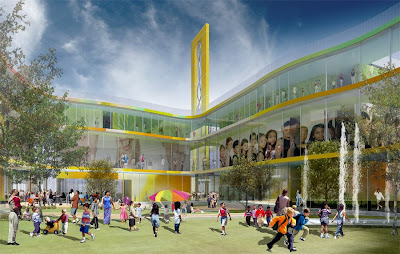 One of the almost innumerable fallacies propagated by the Chicago Childrens Museum and its supporters in their quest to jam a bunker-like construction into precious open space in Grant Park is that it's OK to bury their nightmare vision deep underground because natural light is a natural enemy of museums, as if there was they saw no difference between themselves and the Art Institute. An art museum, of course, displays paintings and other objects given to fade under direct sunlight. The installations of a children's museum, on the other hand, must be specifically designed to be robust enough to resist, not sunlight, but the physical enthusiasms of its young visitors. Natural light is not a contaminant, and, in fact, is liberally deployed in the CCM's current Navy Pier home.

And if there is any doubt on this point, we give you, at the top of this post, the recently unveiled design by Pelli Clarke Pelli for a new National Children's Museum in Washington, DC. Its continuous glass walls embrace the sun, not cringe from it. The adjacent lawn is generous, open and unbroken, not squeezed between skylights that resemble upended jagged shards of glass. This is what you get when you actually design a childrens' museum for children, and not to placate the personal agenda of a prominent heiress and the political objectives of his primary patron, a mayor intent on gutting, once and for all, the A. Montgomery Ward protections for Grant Park

On a related note, Save Grant Park, which continues to work to block the museum's illegal land grab, reports that an initial hearing on a lawsuit to force the CCM to go "back to the drawing board" has been rescheduled to May 12th, while arguments for a second, asking for a court review of the process through which the CCM's proposal slid through the Plan Commission, Zoning Committee, and full City Council, are set to be heard this Thursday, May 7th. The group has gathered over 4,500 signatures on its on-line petition, and it's grassroots organizing efforts on behalf of Grant Park have earned it the IVI-IPO's 2009 Harold Washington Award, to be presented June 20th.

To the legal roadblocks to the museum's construction must now be added economic and political ones. It can only hoped that the tanking economy, coupled to a rising disgust with the CCM's hamfisted tactics and often fallacious PR will help dry up funding for this misguided project, which is made even more unnecessary now that the awarding of the state's last casino license to Des Plaines has dashed dreams for a Chicago casino at Navy Pier, securing CCM's position there far into the future.

What the hell are we doing building all these "children's museums" anyways? Seriously - these are overblown McDonaldlands. Put these kids in a park with a ball instead of "programing" their entertainment.

Who truly are the IDIOTS behind the torturous selfish nonsense?!!

Thank you for staying on this story, Lynn.

This underground museum is the dumbest planning mistake in a long time. It ruins the chance for more park land. It simultaneously creates a lousy children's museum.

Best wishes to the Save Grant Park organization. Thank you for fighting!

Why do we want to keep our children underground?