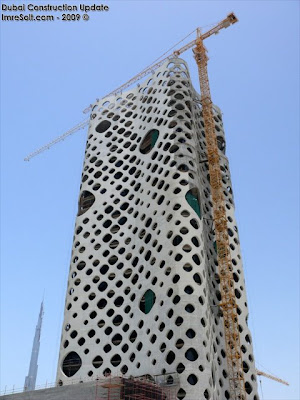 Usually when you see some architectural firm's really pushing-the-envelope design, your first - and correct - reactions are: a. it's very nice and b. it will always remain in the unrealized perfection of the drawings.

Occasionally, however, such a design does get built. Case in point is New York-based reiser + umemoto's stunning office project O-14, which has actually just been topped out in the architectural fairyland of Dubai, and is projected to be completed next year. Like SOM's 1961 Hartford Building on Wacker Drive . . . 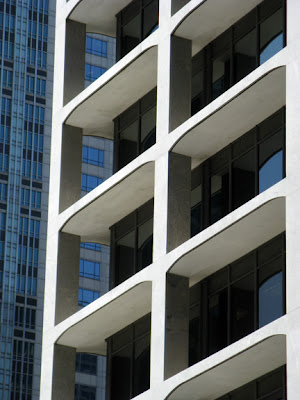 . . . O-14 wears its structure as an exoskeleton. Unlike the more conventional Hartford, however, 0-14's exoskeleton creates a column-free interior. It also provides solar shading, and pairs up with the glazing set a meter within to create what is the equivalent to a double-skin facade, whose chimney effect channels hot air - of which I hear there's a lot in Dubai - up through the cavity, cooling the surface of the window wall.

The exoskeleton is of self-consolidating concrete cast around a "basket weave" of reinforcing steel, with the large circular openings created by inserting cut polystyrene voids in the "basket-weave" rebar matrix. You can see an illustration of the process in photographs accompanying this fine article on Arcspace, from which we've stolen borrowed the image below. 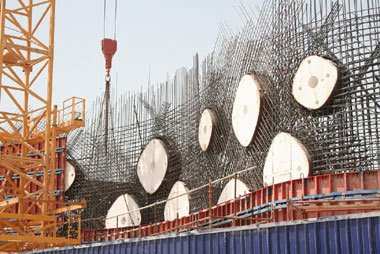 reiser +umemoto's website also includes their interesting entry in a competition to design a new home for the Pittsburgh Children's Museum. Like everyone else in the world excepting the bunker-loving Gigi Pritzker Pucker, Mayor Daley and their minions, the architects recognize the importance of making a "building that is at once light and inviting." (Since it's designed with Flash, we can't provide a link to the project's page on their website - you just have to burrow to find it.) 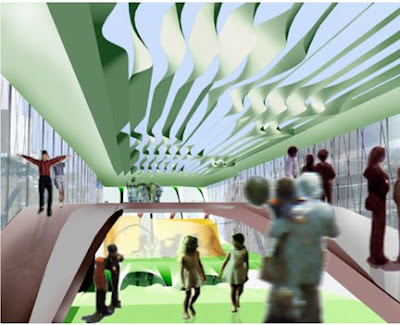 In an amazing coincidence, Lucien Lagrange, working independently, completely unaware of reiser + umemoto's design for O-14 , came up with a strikingly parallel concept to counter Mies van der Rohe 860-880 Lake Shore Drive apartments when the Chicago architect assumed he would get his hands on the Athletic Club site right across the street.* 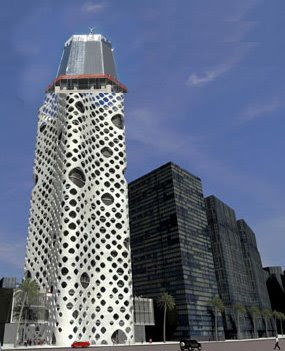 Did termites get to the original pencil sketches by reiser + umemoto?

wow, the lagrange design is like a replica. if its true that he had no knowledge of the other building, that raises some interesting questions about the emergence of trends. im curious if any studies have been done on this. the way i sort of see it is some discoveries or trends are inevitable, like a critical mass that has been built up, and its just a matter of the time being right for it to flourish. and once it is, theres probably multiple people with the same thought or idea, completely independent of each other.

looks like someone needs to attached googlie eyes above the big holes.