A Great Show and a Great Storyteller: Tim Samuelson on the art of John T. McCutcheon today at 12:15

Here's a show you shouldn't miss: The Cartoons of John T. McCutcheon: Chronicles of A Changing World, at the Chicago Cultural Center through September 27th. The Pulitzer-Prize-winning artist, whose career ran from 1889 through 1946, mostly at the Chicago Tribune, was most of the celebrated artists of his time, and a walk through the exhibition makes it easy to see why.

And today, June 4th, at 12:15 p.m., you can hear exhibition curator - and one of our city's best storytellers - Chicago Cultural Historian Tim Samuelson give a gallery talk. (They'll be one more, on Thursday, July 9th, also at 12:15) The exhibition - and Tim - are in the Chicago Rooms, 2nd 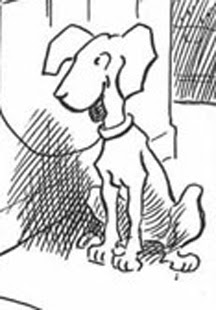 You can see a few snippets of his opening night tour from last Friday below, which also also illustrate the striking way curator/designer Nathan Mason uses walls of different bright colors to make the rich, mostly black and white drawings pop. Instead of your eyes growing tired as you move row after row, they're refreshed each time you move to a new panel. SPOILER ALERT: stop watching the video after the background goes orange-yellow to avoid learning the secret of the McCutcheon's "Mysterious Stranger" drawings before you see the show.

The Mysterious Stranger is just one of a wide universe of characters populating McCutcheons's series A Chronicle of Social Happenings at Bird Center, from 1903 and 1904, a melodrama in pictures of the goings on in a mythical small town that drew on McCutcheon's own upbringing in Lafayette, Indiana. It was, in the words of a current writer, The Simpsons of its time, immensely popular. So popular, in fact, that it inspired a play written by Chicago novelist George Ade, Captain Fry's Birthday Party, that was performed by members of the fine arts club The Little Room. As documented below, the members happily assuming the identities of various Bird Center characters included Poetry editor and John Wellborn Root biographer Harriet Monroe, and such prominent architects as the Pond brothers, Hugh Garden, and Howard van Doren Shaw, McCutcheon's father-in-law. (click to see larger version.) 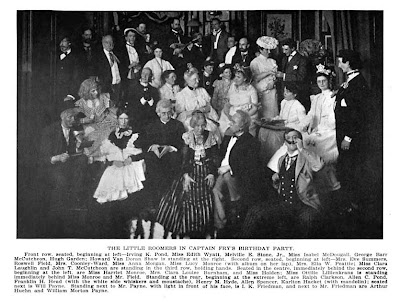 Much of McCutcheon's style falls within a fairly conventional center, but there's no shortage of engaging, eccentric accents. One drawing of the cartoonist, shown from behind, sweat shooting out of his head like a nimbus as he struggles against deadline to come up with ideas, could have been drawn by Robert Crumb. Extras filling up a street in another cityscape, by Saul Bass. 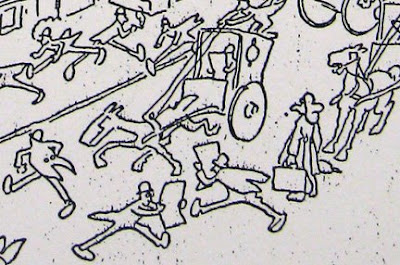 And then there's the architecture, depicted, mostly in witty caricature, but sometimes also in sharp detail, not just in the operatically scaled scenes of the rising of the city's skyscrapers, but in the smaller snapshots of its brutal, unsentimental dynamism - an abandoned church turned into a storage warehouse, a closed synagogue a cigar store. Politics and corruption (or should it be politicscorruption?) are also explicated with a satiric acuteness not even Mike Royko could better. Walking through this exhibition, you really feel you've stepped back in time, immersed in the huckster exuberance of Chicago at its boom town peak, all vividly captured byMcCutcheon. 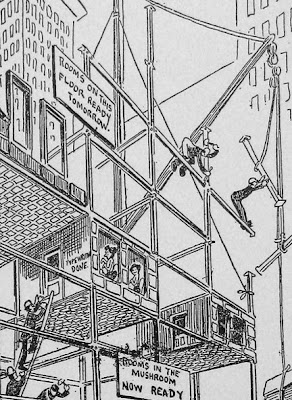