Not Pritzker perfect, but a new South Loop park a welcome addition to State Street 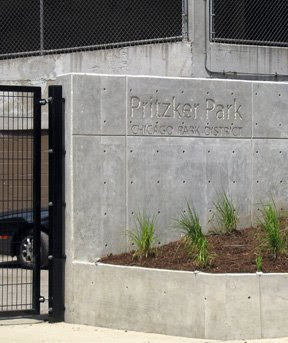 This is what it looked like in 2006, a flat, usually deserted expanse of fenced-in lawn: 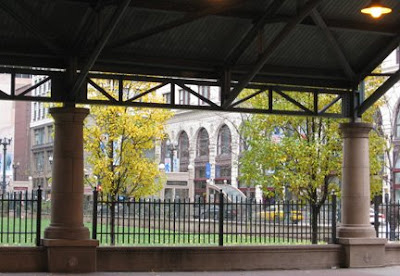 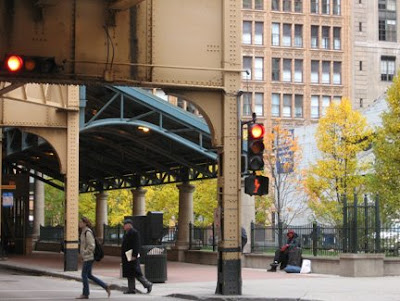 This is what it looked like just this past February: 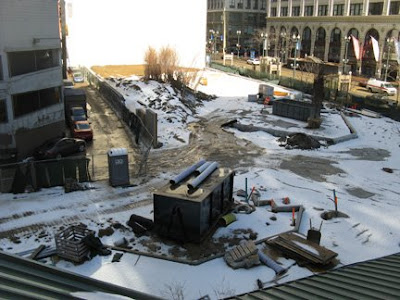 Now Pritzker Park, at State and Van Buren, is finally open, shorn of its unwelcoming fencing. The trees and the plantings still look a little sparse, but with time they should fill in. Last Saturday, there was only one other person taking respite in the quarter-block space, but with DePaul just across the street, you'd like to think it will become more popular, especially once all its amenities are in place. 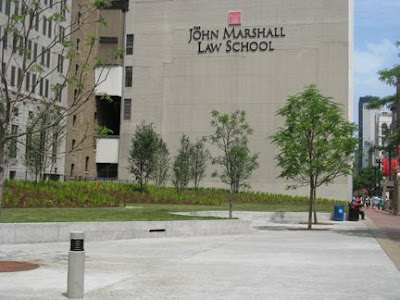 The concrete edgings for the planted spaces are inscribed with quotations from a large and eclectic group of writers which ranges from Richard Wright, to Carl Sandburg, Walt Whitman, and that jolly Nazi philosopher and prince of polka Martin Heidegger. Poor Walt - his words are partially obscured by a garbage receptacle, but he still fares better than Indira Gandhi, whose name is covered over with black tape, as is that of Sandra Cisneros, whose name was misspelled "cisenos."

Right across from the library, and no one could find a proofreader?

"You can never have too much sky," is the Cisneros quotation. The park's planners have apparently came to a parallel conclusion that you can never have too much flat concrete. Although the northern half of the park is generously landscaped, the southern half is disturbingly barren. All the tall trees that lined Van Buren were uprooted and removed. Reports are that a large chunk of the expanse is to be turned over Chicago's bus shelter king JCDecaux for concessions and a cafe to be designed by New York's Robert A.M. Stern Architects. Let's hope Stern comes up with something more graceful than his stubby-limbed bus shelters strewn throughout Chicago's streets. "Removable seating" is also promised, on the website of park designers HoerrSchaudt landscape architects. 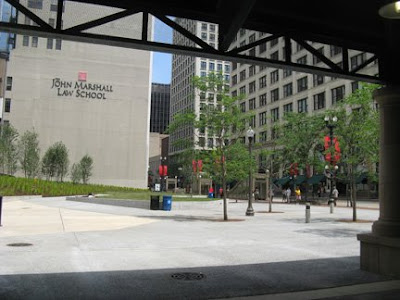 Even in its current schizoid, unfinished state, however, the new Pritzker offers a welcome change from a site that suffered from not-so-benign neglect until the city transferred ownership to the Park District in 2008. The old fencing and abutments basically negated the value of the openness by shearing it off from the surrounding streetscape. Now, movement flows unimpeded, and both Thomas Beeby's Harold Washington Library and the re-emerging beauty of Holabird & Roche's 1894 Old Colony Building get a welcome frame of space and perspective.

Even more importantly, Diane Legge Kemp's brawny Library Loop L station, which previously seemed uncomfortably shoehorned between the library and the fencing, now has room to breath, and the station and its rustic arcade offers a graceful hem-like transition from the park to the library's massive facade. 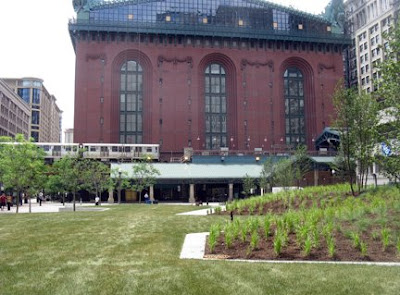 If only there were pictures of this site back in 1999-2000. It was more open back then as well. Although the unfortunate part is that the homeless might be there taking a nap and it was fenced in. I only wonder why they closed it off and took up the sidewalks within the park.

The park is an improvement and a great meeting place in this part of the Loop heavily populated with college students. I hope to see more musicians (not bucket-kids) and coordinated activities here. The pervious paving at the southeast portion of the park is intersting as well.

Im sorry, but this thing is atrocious. Theres more concrete than there is grass and landscaping. And what little grass that does exist is raised up on concrete walls, implying that its "off limits". Bizarre jagged walkways. No benches upon which to sit. And the beautiful surroundings of...a blank monolithic wall (thanks for that one John Marshall), the traffic insanity of State Street, and the deafining roar of an L train every 3 minutes.

The entire experience is wholly awkward and uninviting.

I must agree with Anonymous #2. Personally I have no problem with concrete or urban ambiance - both have been used to great effect. But this is boring, barely landscaping at all, just planting some trees.

Anonymous #2- Chicago's bucket kids are as real and talented as it's jazz musicians. All great cities embrace it's citizens' spontaneous artistic expressions- you and Alderman Reilly clearly need to take get out of the 312 once in a while.

Anonymous #3- If you don't care for State Street's traffic, the roar of the "L", or the walls of Chicago's buildings, then what may I ask are you doing in this city to begin with?

Becker- I think you might be judging the park too quickly, too soon, and with the wrong mindset. You seem to be looking for Trump Tower or the Modern Wing on opening day. As you well know public spaces and parks cannot be visited and reviewed like a building, but rather based on repeated visits across time. For example, of course its trees and plants will mature over time, but that isn't the point. The point is to witness and appreciate that change, not to wait around somewhere else waiting for the plants to "fill in."

Unfortunately, recent Chicago history is that if a public space isn't good from the beginning - and the Vietnam Memorial and Lurie Gardens were impressive, even at the beginning - odds are better than even it won't evolve, just get worse. Let's hope Pritzker Park is the exception. It is also entirely appropriate to immediately critique aspects of the park that are hard-wired and unchangeable short of reconstruction - the great unlandscaped expanse being the prime example.

I have nothing against traffic, buildings, or L trains. However, the appeal of parks is to escape those things momentarily. I also noticed you didnt address any of my other very real concerns.

Additionally, if you're going to try and tell me that god-awful windowless John Marshall facade is appealing and inviting from a pedestrian standpoint, you need to get your head examined. Believe it or not, such a thing as bad architecture does exist, and you're getting an great big eyeful of it from this park.

I'll withhold the final judgment until this patio furniture they keep promising arrives, but as far as I can tell, this is not a place I would want to spend any considerable length of time in. And if a lot of there people feel the same way I do, then this endeavor has solved none of the problems that this plot had to begin with.

Indira Gandhi and Cisneros, what a bunch of phonies.

What was the funding mechanism for this project? TIF or private?

What a remarkable coincidence that, after years of mysterious inactivity on the reconstruction of Pritzker Park, as soon as it was mentioned as a possible alternative site for the Children's Museum, construction of the new park began——in the dead of winter.

But then you get a park that is more concrete than landscaping.

Seems to be a disconnect somewhere.