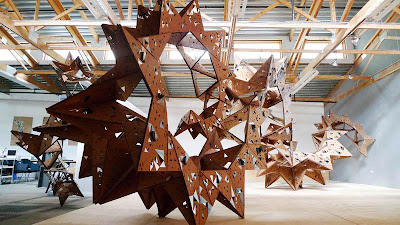 tonight, Thursday, June 18th 6:00 p.m., at Archeworks, 625 N. Kingsbury at Ontario. A gallery talk on Ellingsen's exhibition SEA: Seeing Eye Architecture, a species of Architecture Service Animals, at the Extension Gallery at Archeworks through July 10th. SOS is described as "structured on the illogical leaps of open door collaboration, cultivated difference, the responsibility of risk, and the joy of the embodied imagination playing in space and matter." 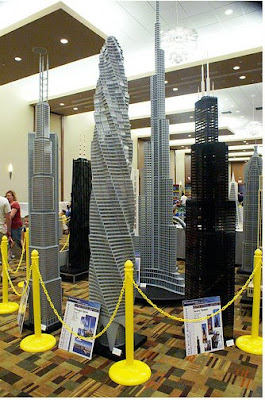 this weekend, Thursday through Sunday, a conference for adult Lego-maniacs, ($50.00 registration) with public days Saturday and Sunday, tickets sold at the door only $10.00 adults, $7.00 seniors, kids under 10 - kids under 3 free. Website site here. A great compendium of the amazing Lego structures that were seen at least year's event (it may be the only place you'll ever seen a completed Calatrava Spire) in photo's - including the one shown here - by the tireless Bob Johnson here. 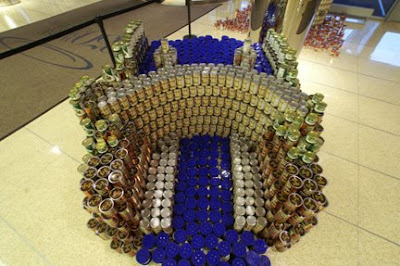 the annual event benefiting the Great Chicago Food Depository at the Apparel Center, 350 Mart Center Drive (or Franklin, just north of the river) in which sculptures are made out of 86,000 cans of food, to be donated to the Depository at the end of the show. A jury that included Alpana Singh, Jimmy Bannos, Craig Vespa and Zoka Zola this year awarded Juror's Favorite to Nagle Hartray's Can-tastic Voyage. You can check it out through June 28th, suggested donation at least one can of food. Ths photo here is also (inevitably?) from Bob Johnson, and I'm told on reliable authority that it's a dam. 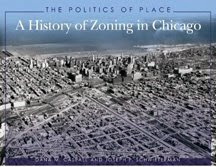 including 42nd ward alderman Brendan Reilly and the man who, literally, (co)wrote the book on Chicago zoning, Prof. Joseph P. Schwieterman. It's being put on at the Chicago Yacht Club June 24th - $50.00 members, $60.00 members - and if you don't make yourself a royal pain, they'll let you stay and watch the Wednesday fireworks show afterwards. Info here.

Ellingsen, our common Marina City neighbor, lives upstairs from me and in the past year has spent far too much time breaking the condo rules and hammering together crap like that directly above my head.