No Room for the Inn: Mondrian Stateless; Waterview "Worthless"

Two stories this week in Crain's Chicago Business underscored how the current slump in hotel fortunes is affecting the city's architecture. 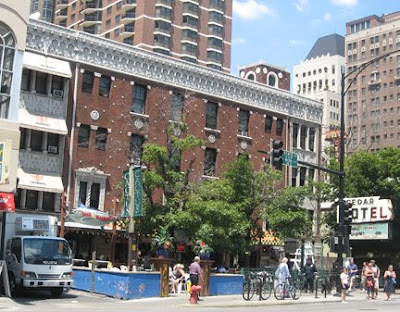 On Wednesday, Crain's reported that it's now official: there will be no Mondrian Hotel on State Street. The plan of the buyers of the former Cedar Hotel at 1112-18 North State, shuttered since 2007, was to strip off its terra cotta facade, demolish the hotel behind it, construct a new 200 room building in its place, and then slap the old facade onto it, in still another instance of a practice that's becoming so common in this city that it should probably be renamed a "Chicagectomy". (It will interesting to see what happens to another property, the historic Esquire Theater on Oak Street, which the same developer acquired with the idea of knocking it down for a new development.)

No one knows what to do with the hotel, but the ground level space that was formally the long-time home of Melvin B's Truck Stop and the adjacent bar my co-workers used to affectionately refer to as "Man vs. Margarita" will soon be the home to a new pub to be named, ironically enough, Cedar Hotel. Let's hope it will bring back the outdoor terraces teeming with imbibers that were a more democratic counterpoint to its more pretentious Viagra Triangle neighbors. 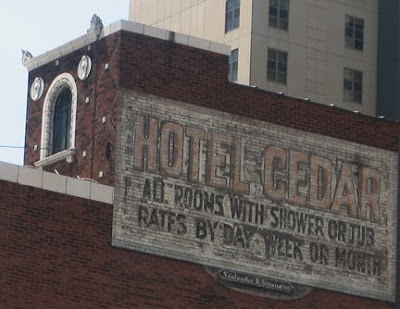 The news in Shangri-La - the hotel version - is even worse. Crain's also reported this week that the Bank of America has foreclosed on the hotel's intended home, Waterview, the projected 90-story tower that has remained an empty, 26-story stump since the money ran out last year, constructed halted, and the innkeepers fled. It seems no one has a good word to say about Waterview now. One lawyer for one of the other lien holders calls it "worthless"; a second attorney is quoted by Crain's as saying “The property is worth less than it would be if it was vacant." 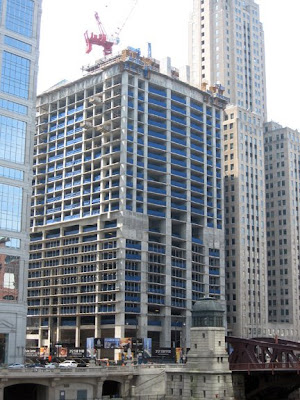 Forget the Burnham Memorial. Let's do something useful and have a architectural competition to come up with ideas of what to do with the massive, abandoned concrete abortion on West Wacker.

Meanwhile, the Joseph P. Kennedy award for smart investing in an economic meltdown has to go to Kimpton Hotels. I named this award after the booze peddler who in 1945 paid $11,500,000 to buy the Merchandise Mart from a desperate Marshall Field & Company that had built it at a cost between $32 and $38 million, only to see the Great Depression transform it into an "Chicago's #1 real estate white elephant." The Mart became the cornerstone of the Kennedy family fortune (in 1998 it would be sold for over half a billion dollars), eventually supporting Joseph P. Kennedy's prodigious bankrolling of the successful 1960 presidential campaign of his eldest son Jack.

Strategic Hotels, sent to the ropes by the deepening recession, pulled out of a deal to build an annex to their Fairmont Hotel in Jeanne Gang's new Aqua Tower. While other chains are overleveraged and reeling, Crain's reports that Kimpton Group Holding, which last year end created a quarter billion fund specifically to pick up the bargains that a crashing market presents, is close to sealing a deal to take over the 15 hotel floors at Aqua for $56 million, a third less than Strategic was going to pay, with that $28 million difference matching the $28 million in earnest money that Strategic left in the developers pockets as they walked away from their deal. 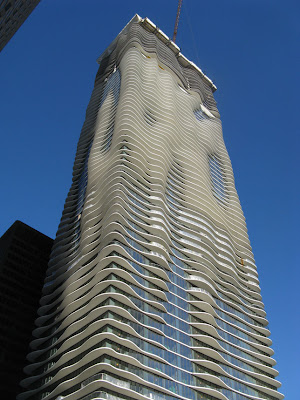 Analysts are calling the deal a major risk for Kimpton, but to me it looks like a masterstroke. Aqua has a great location, equidistant between Millennium Park and the Mag Mile, and its completely unique profile of sculpted balcony slabs offers both a distinctive branding vehicle and, at 80 stories, a kind of architectural GPS device, with the tower visible in the skyline all across central Chicago, allowing travelers to easily get their bearings and find their way safely back to their rooms. POSTSCRIPT: The new edition of Crain's is reporting that the Kimpton deal may not have been the lock they originally indicated, and that negotiations are continuing with the final results as yet far from certain.

The Esquire was for all intents and purposes a facadectomy already, from 1989. The old interior was totally gutted and additional floors were added. I hope whatever new development occurs retains the facade but I'm not holding my breath.

Now there's Karma. The developers who wanted to demolish the stunning Cedar Hotel, with a reassembly of the facade, deserved this comeuppance.

The Cedar Hotel, with it's outdoor space, is pure Chicago.

I really don't see the problem with either the Cedar Hotel or the Esquire project. The Cedar's only worthwhile feature (to my knowledge) is its facade, which would be saved. The rest would be demolished for a nice hotel tower, which annoys the Gold Coast neighbors, which makes me feel better.

While I'd like to see a theatre on Oak Street and do enjoy the Esquire sign, I don't know what you could do with the property except demolition. Unless you find an operator, you'd probably have to gut it for a mall like Century because the facade isn't useful for high end designers.

Not exactly sure what a "cornerstone" of a family fortune would be but considering Joseph P.'s long history bootlegging, strip-mining movie studios and other sharp practices before buying the Mart, I've always thought that the idea that most of their fortune was sunk into one building, however big, was merely spin intended to distract us from the less socially respectable things it was really in.

This was long after prohibition. Think of the Mart as the elder Kennedy's massive money laundering machine.