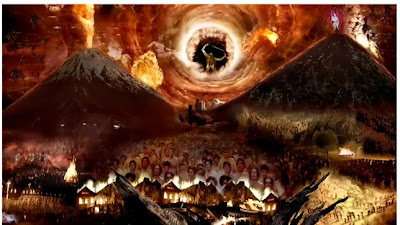 Imagine leaving your swanky hotel room, entering the elevator and descending into hell. No, we're not talking about the trip down to the mall level at Illinois Center. It's actually an incredible installation, Civilization, created by video artist Marco Brambilla, working with Toronto's Studio Crush, that can be seen on an HD display through a viewing port in the elevators of André Balazs' swanky new hotel, The Standard New York, designed by Polshek Partnership Architects for a meatpacking district site straddling the newly opened High Line, from which views of guests having sex in the hotel's windows has apparently become a major competing attraction.

The 1920 x 7500 pixel video is composed of 500 clips from 400 sources - from stock, film (no doubt you'll recognize many of them) and original content - combined to form a spectacular tableau of six main sections: hell, lower purgatory, middle purgatory, upper purgatory, heaven and upper heave/lower hell. Yes, the damn thing loops, so you're constantly moving from the highest point of heaven, only to plunge right back to the depths of hell. Kind of like my average Friday night. 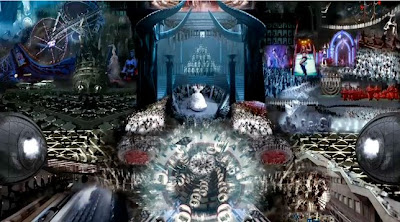 View the entire video, and see photos of how it's mounted in the elevators, here.

Unknown said...
This comment has been removed by the author.
5:17 AM

Wow, this is hell cool. That's what I called great elevator design.
www.leftdesignshop.nl