Got 12 cents a square foot? Take our Post Office - Please! 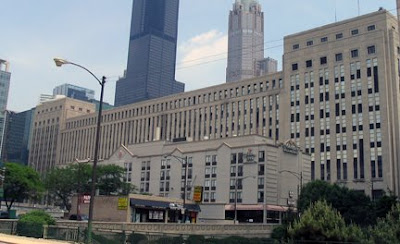 That's right, friends. Just 12 cents, a measly 12 cents per square foot, could make you the proud new owner of Chicago's largest antique: the 1932 former post office! Straddler of expressways, repeller of investors, threatening bankruptcy to any demolition company who dares to destroy it - it can all be yours!

That 12 cents comes from dividing the building's 2.5 million square feet (the Merchandise Mart has 4), into the suggested opening bid of $300,000 for an August 27th auction of the property. As reported by, among others, the Sun-Times David Roeder, Walton Street Capital has walked away from a $300 development plan that would have seen the razing of a large part of the building that crosses over the Eisenhower Expressway. The deal collapsed even though Walton was in line for a $51 million subsidy from the local TIF slush fund, and would have gotten back $9 million of the $10 million it was going to pay the postal service for the acquisition.

Now the postal service, spending $2 million a year just to keep the building shuttered, is reduced to playing the role of desperately motivated seller. "Whatever we can get from a sale," a spokesman told Roeder, "every penny counts." So that $300,000 could be the opening of a Dutch auction; not a floor, but a ceiling from which bids descend on a steep incline towards zero. If you're enough of a gambler, you might be able to win the behemoth on Harrison for not even the change in your pocket, just the lint. 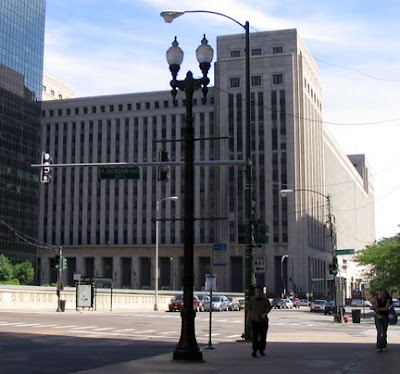 The old Main Post Office was once a proud symbol of civic achievement, of American power and affluence. It's block long lobby was one of the most spectacular - if chilly - interiors in Chicago. Now it's garbage. 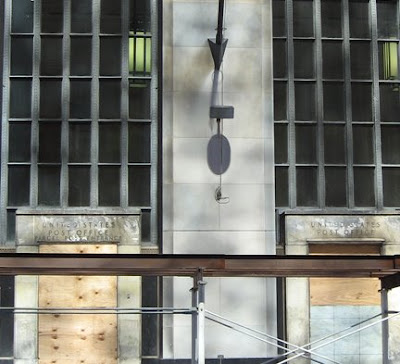 So we're back to square one. We could do a lot worse than to return to architect John Ronan's brilliant vision of turning the Post Office into a Municipal Mausoleum, a Pantheon for both Chicago's greatest and its common men and women, an incredible spectacle of urban drama that boldly re-imagined the expression of urban life - and death - through architecture. 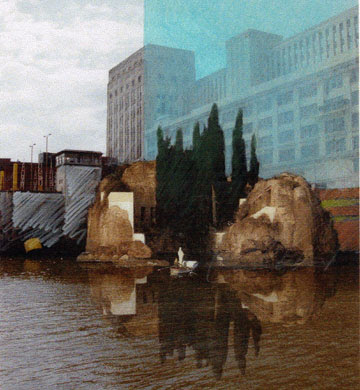 Of course, all of the city's dutifully sober critics at the time, most prominently dismissed the concept as a morbid caprice not even worth discussing. The big idea on their platter? (Except for Blair Kamin. Blair Kamin never proposed condo's) Condo's. Carving condo's out of floorplates as big as two square blocks and actually suckering people into buying them. Yeah, right. Remind me again, which of those ideas was the big fantasy? 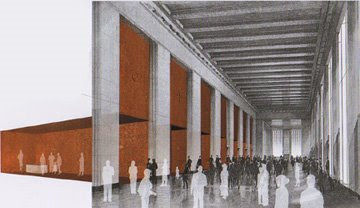 Read what I wrote about Ronan's proposal here - with illustrations - and judge for yourself.

Hi Lynn,
Fantasy? That would be your summary of what I wrote about Ronan's plan for the Post Office. Yes, I dissed it as wildly unrealistic (it still is), but I never, ever suggested that condos were a better idea. I'd appreciate it if you'd correct your mistake.
Many thanks.
Blair

"Some of the proposals are so dreamy that they invite instant dismissal. Take John Ronan's idea of turning the old Post Office into a municipal mausoleum and putting funeral barges on the Chicago River. Just what every business leader wants--a symbol of death at the doorway to downtown. Despite a beautifully designed open-air exterior that would bring light and air into crypt areas, this proposal, pardon the expression, is DOA."

If that's not dismissive, I don't know what is. Did Blair specifically mention condo's? No. Was his take on vision a passive sop to "business leaders" for whom the answer to just about every development problem - including the Post Office - was adding to what would quickly become a massive glut of condo buildings from which the Chicago real estate sector is still trying to recover? Again, you be the judge.

Pappageorge Haymes Architects more recently produced a brilliant preliminary design for Condominiums for the South Half of the building, naturally, with the Condo market, those plans evaporated..

Hmmm... It does seem you need correct your post at Kamin's request.

You said, "Of course, all of the city's dutifully sober critics at the time, most prominently Blair Kamin, dismissed the concept as a morbid caprice not even worth discussing. The big idea on their platter? Condo's."

I don't think it's fair that you specifically include Kamin with the group that wanted to turn the old Main Post Office into condos. He simply said the mausoleum is a bad idea. You're lumping Kamin into that group through loose, unproven association.

At Toronto Condo Investment Management we not only help you find the right Toronto condo property, we maximize the income potential of your condo investment and efficiently manage every aspect of your condo property. Toronto Condo offers a unique and customized approach that will guide you through the Toronto condo market helping you achieve a profitable condominium investment.