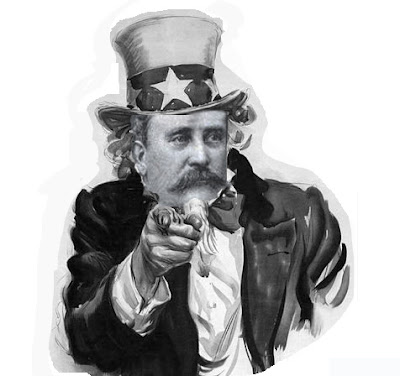 July 4th, the day the Adams died (Jefferson, too), is not only the 233rd anniversary of our nation's birth, it's the day that Daniel Burnham and Edward Bennett officially unveiled their 1909 Plan of Chicago. As part of an enormous range of events the Burnham Plan Centennial Committee has co-ordinated to celebrate and contemplate the plan, at 1:00 p.m., the Chicago History Museum will be including a "Daniel Burnham historical re-enactor", Living History Theatre’s R. J. Lindsey, presenting a slide show titled, inevitably, Daniel Burnham: Make no Little Plans, in the History Museum's Rubloff Auditorium. It's free, and part of the museum's 50th 4th celebration, which takes place from 10:00 a.m. to noon on Uihlein Plaza behind the museum at 1601 N. Clark. At 11:00, there will be a "keynote oration will feature members of the Burnham and Bennett families in honor of the 1909 Plan of Chicago." Muskets will be fired, declarations will be read, faces will be painted, and at 10:45 a.m. children's costume parade promises "the world’s tallest Uncle Sam". 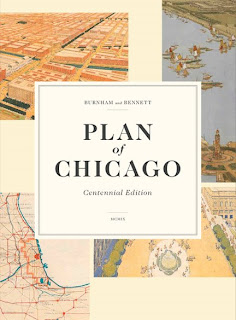 The Museum's celebration will also mark the presentation of the Great Books Foundation just-issued new edition of the Plan, available in paperback for $39.95, with an introduction by Carl Smith, author of The Plan of Chicago: Daniel Burnham and the Remaking of the American City, and what is promised to be better quality illustrations than those found in the hardcover reprint of the Plan issued by Princeton Architectural Press, which has its own excellent introduction, by Burnham scholar Kristen Schaffer, and carries a list price of $85.00. A a paperback edition on Amazon is listed for $38.90 on up. Great Books is also publishing their version of the Plan in a "special hardcover collector's edition", complete with a hair from Burnham's moustache (or perhaps not) for $125.00. Both editions are available for purchase directly from the foundation, and at various venues, including the museum store, throughout Chicago. 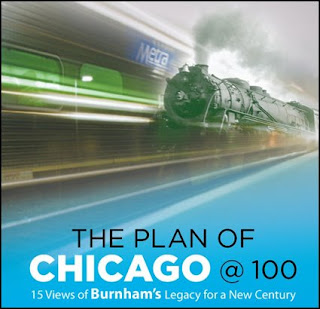 Another new book is The Plan of Chicago @ 100, published by the Ely Chapter of Lamba Alpha International, made up of scholars and activists in the land economics field. You can see the list of topics and authors, which includes people such as Lawrence Okrent, Joseph P Schwietmann, and John Norquist, below. The book is also available at the Chicago History Museum, or directly from the publishers for $19.95 plus shipping and handling, here. 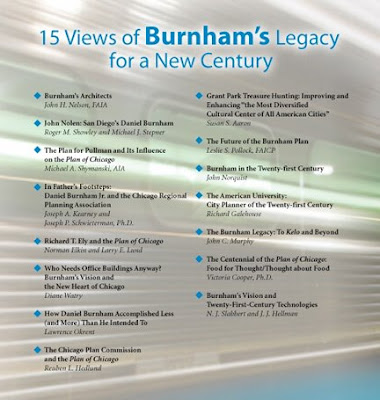