I told you we should have gotten Kelleher's check up front 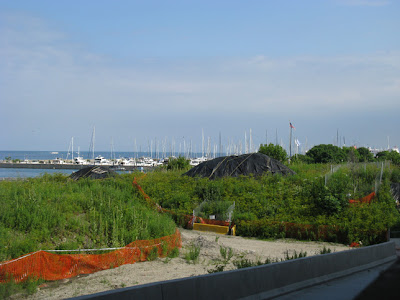 A few commentators slammed me for being ungracious when I suggested in 2007 that we impose on the developer of Santiago Calatrava's proposed Chicago Spire, Garrett -"I have absolutely no doubt this project is going to sell out" - Kelleher to monetize upfront, as a reasonable pledge of good faith, his $9,000,00 commitment towards the estimated $14,ooo,000 cost of realizing a Calatrava design for DuSable Park, intended to honor the city's first non-native settler, on a 3.5 acre strip of land at the mouth of the Chicago river. The project has been gestating ever since Mayor Harold Washington dedicated the site all the way back in 1987. Two and a half years after Kelleher's announcement, the Chicago Spire remains nothing more than an enormous hole in the ground, and the photo you see above depicts current conditions at DuSable.

It was a miracle!

actually, the dedication was in 1987. correction made.

thanks for pointing this out.

If the project isn't realized, how is he supposed to come up with $9 million? He is running a business- he'd look like an incompetent exec if he gave away $9m with no tangible benefit to the company (if the Spire doesn't move forward).

So let me get this straight. A developer who has to come up with a billion dollars to build his project, with large upfront expenditures for site acquistion and building that huge hole should be given a pass on a $9 million pledge to the city for the park? Very funny.

It doesn't matter who the developer is or how large the budget. You cannot impose extraordinary costs upfront for something unrelated to the project's development and expect a building boom in the city.

It's simple really. If the project dies then the associated public goodwill goes down with it.

Kelleher used the promise for the park as basically a bribe to advance approval of his very shaky project. Every reputable developer - including Hines - will not even begin construction until financing is in place. Kelleher did not.

He was using DuSable as a staging area. So, basically you're saying he gets to use city property for nothing. If nothing else, the city should have gotten the money as a user's fee for use of the park site. If Kelleher couldn't come up with it, it would ended this entire sorry farce early on.

I agree with Lynn on this one. Because the developer already broke ground and took advantage of the city property, they should be held accountable and expected to complete their promised improvements.