Since we're a bit of a sluggard, we've already missed the chance to alert you to a tour of Chicago 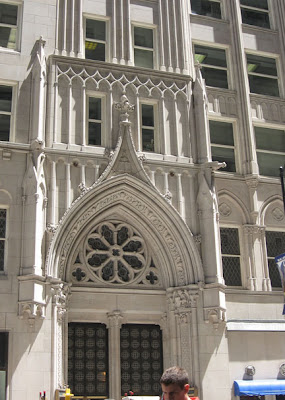 Sinai Congregation last Thursday, but the local branch of Sacred Space International is offering a total of 12 tours this summer of "a diversity of worship spaces throughout Downtown Chicago with architectural tour guides."

We don't have the full schedule, but this Thursday, July 23rd, will see the opportunity to tour what is claimed to be the tallest church in the world, the sky chapel 400 feet up in the Chicago Temple building by Holabird and Roche. Although the building itself dates back to 1921, the sky chapel was added in 1952 as a gift from the Walgreen family. The First United Methodist Church, whose main 1,200 seat sanctuary is on the first floor, has been at this location since 1838, and it's the last survivor of what was once Chicago's church row, where most of the

Next weeks tour will be of the Downtown Islamic Center, located in a five-story building where

the ground floor appears to be the usual State Street retail building but "with one step inside, the DIC offers visitors a calm oasis away from the activity of the city. The founding of this center stemmed from the need for a place to observe Jummuah, traditional Islamic Friday prayer." 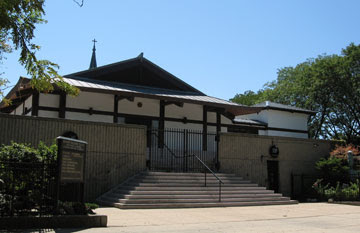 Future tours, taking place through October 1st, will include such locales as the Midwest Buddhist Temple and Harry Weese's Seventeenth Church of Christ Scientist.

Huh, I never knew an Islamic Center was in that building. I've always wondered what the original facade looked like and if it's salvageable.