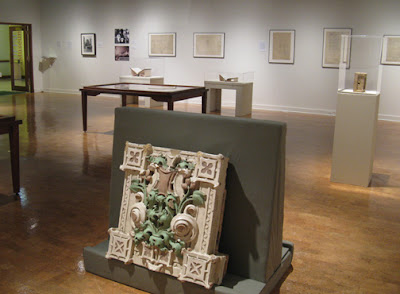 Sometimes the most enjoyable shows can be the ones at the periphery. Building the Business of 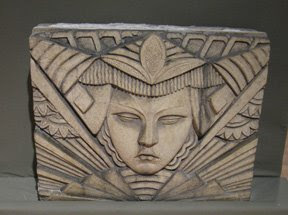 Architecture: The Burnham Brothers and Chicago in the Golden Twenties, at the DePaul University Art Museum through September 16th is a small show but a good one. Although there some different pieces - handsome examples of terra cotta from Stuart Grannen of Architectural Architects and some drawings and photo's of the Carbide and Carbon Building (now the Hard Rock Hotel), probably the Burnham Brothers' most accomplished work, the exhibition focuses heavily on a single building,

The structure in question, the 23-story structure Engineering Building at 205 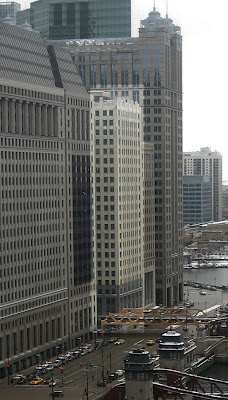 West Wacker, is one of those large - and largely anonymous - buildings that fade into the surrounding streetwall, in this case the one along the south side of the Chicago river. At the time of its completion in 1928, however, it was a prestige project, home to a large number of engineering firms, with the headquarters of the Western Society of Engineers taking up the 11th floor. The exhibition includes a large number of "heavily annotated" working drawings, and sharp, informative text from curator Paul Jaskot, professor of art history at DePaul, who calls the building's Wacker drive location "a fantastic site for exploring the intersection of urban planning, economic history and the importance of advertising to architects in the 1920s." The Burnham Brothers were Daniel Burnham's sons, Hubert and Daniel, Jr. Their firm was one of two eventually split from D.H. Burnham and Company, the other being Graham, Anderson, Probst & White. 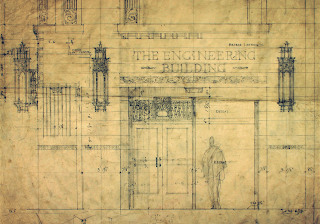 an expression both of economy, lightness, and an era when Chicago was still constantly rebuilding. "By 1926, the average building in Chicago's Loop district had a predicted lifespan of only twenty-eight years, and therefore builders did not choose the most expensive, long-lasting materials, preferring those that could be acquired cheaply while also being aesthetically pleasing." 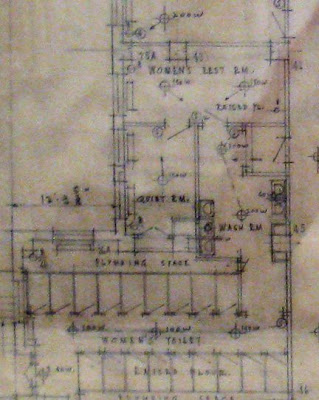 When I was a kid growing up, out with the family, we would find ourselves, when nature called, searching for what was called, seemingly interchangeably, a bathroom, washroom or restroom. One of the most interesting part of the Burnham Brothers show is to see how these terms actually evolved at a time when women were becoming major components of the workforce. On the plan for the Engineering Building's 13th floor, there's the usual "men's toilet." But there's not only a corresponding "women's toilet", but adjacent spaces labeled "wash rm", "women's rest rm" and still a third, with the name "quiet room." Hey, in a time when we tend to be crammed into stacked cubicles, isn't that something all of us - regardless of gender - could really use today? There were also separate cafeterias for men and women, and, a sign of the slow tread of progress, a segregated cafeteria for Afro-Americans in the basement.

I don't want to oversell Burnham Brothers - it's not a show that's going to knock your eyes out, but in a year where it tends to be all about making big plans, it's refreshing to see something both smart and human-scaled. The DePaul University Art Museum is at 2350 N. Kenmore, just a couple blocks from the Fullerton L stop. Hours are M-Th 11 to 5, Friday, 11-7, and Saturday and Sunday, 12-5.

I ran across your excellent piece in the Reader on the Burnham Pavilions and the local (with global links) architectural intllengentsia police.

I couldn't agree more. It reminded me of when I was at Harvard in the late 80's and early 90's. The driving forces at the GSD, led by Michael Hays, was not architecture, or even design, but merely the polemic. A very frustrating experience.

Anyway, a few more voices like your own is what we need (even if you mistakenly took a psuedo-populist position with the CCM ;-) )

BTW, you should provide links to great peices such as this one in this blog....

wow, Jack agreeing with me? Is it time to reassess my position? Thanks for the info on the dynamics at the GSD. Burnham piece will be up on my site, I hope, by Monday.

ok, now I'm thinking Wednesday or Thursday - but soon! in the meantime, you can check out the Reader version here:
http://www.chicagoreader.com/chicago/an-odd-way-to-honor-daniel-burnham/Content?oid=1156712