As someone who carries their outcast status around with them like a carapace, who has never been married and is unlikely ever to be married, I hate weddings, but, as anyone who follows my blog will attest, I love wedding parties in public places. I get to be the flaneur at one of the key moments of other people's lives. I can leave when I get bored or roughed up. I love the costumes, the flowers, the interplay with architectural tableau's and interiors.

And so, apparently - and, I'm sure, with a much healthier attitude - does critic Edward Lifson, who has put an incredible series of photos up on his blog of a bride and groom at Renzo Piano's new Modern Wing at the Art Institute, at one point providing a compelling comparison between the rushing bride and Gerhard Richter's famous painting, Women Descending the Staircase, which is actually hanging on a wall only steps away from her.

To get the full effect of Lifson's great shots, make sure you click on each one to see them in higher res. To me, the most amazing of the lot is this one, taken in the wing's Pritzker Garden. 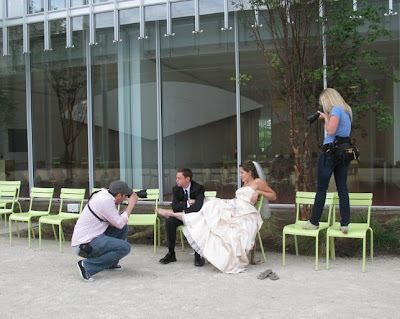 It's a painterly composition, the bride posed with her legs extended, bare feet curled, over the lap of a groom who's looking in the opposite direction, almost as if he were unaware (unable to handle?) her relaxed but assertively sensual presence, accented by the cast-off sandals criss-crossed atop each other on the ground to her left. The reflection of Ellsworth Kelly's sculpture White Curve hovers over their heads like a chuppah, and as you pull back, the supposed intimacy is shattered by the presence of two more figures, photographers pairing off with their subjects - male,male to the left, female, female to the right, capturing the ceremonial exhibitionism of the occasion. The male photographer is like the groom - close to the earth, head on; the female photographer on high, gazing down on the couple as if she were God checking out the progress of her creations.

Indeed, the groom seems so detached in most of these shots that you fear for the future of the relationship, until you get to another stunning shot set against a seemingly infinite white wall. Edward sees this as their purity reflected "by the pure white room." I see it as a cautionary tale of how Piano's overwhelming whiteness threatens to overpower everything it comes into contact with.

Again, you have to click on the photograph to view it at a resolution where you can actually see it. I've cropped a bit here for emphasis. 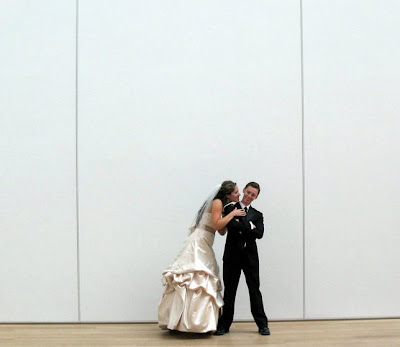 The backstory I see here is that the overwhelming nothingness all around them finally turns the two lovers back in to each other. It's them against the world. The groom is still standing there stiffly, arms folded, legs planted far apart as if he's expecting to be toppled at any moment, but he's smiling, completely softened by the way his bride leans in to him. The geometry is wondrous. The line of her chin extends to the sloping of his left shoulder; the line of the slant of the groom's head extends down the back of the bride's dress. The fullness of her dress provides the secure grounding that the spareness of the triangular perch of his pants legs does not. The richness of her bare arms, the gentle touch of her hand that seems to be going directly to his heart - you get the impression this marriage may turn out OK after all. See all the photo's in Edward's remarkable set here.