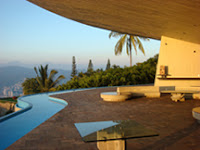 Tonight, Friday, Evanston's Block Museum screens King Vidor's The Fountainhead with Gary Cooper and Patricia Neal, part of their series, The American Architect in Focus, which will also include Infinite Space: The Architecture of John Lautner next Thursday, the 18th.

Tomorrow, Saturday, November 13th, at Sullivan and Wright's Charnley-Persky House on north Astor, John Vinci and Ward Miller will be signing copies of their spectacular, must-have book, The Complete Architecture of Adler & Sullivan.  Reserve ahead to make sure there's a copy for you to buy.

The other big event is this coming Wednesday, November 17th's unveiling of Michael Van Valkenburgh Associates' concept plans for the Grant Park Renovation Project, which will include the presentation of a large-scale model and images.  I'm taking my mom to see The Lion King that night, so I wont be able to attend, but if any of you do, please let me know where the model's winding up and give me a report of your impressions.

Monday, the 15th, MIT's Mark Jarzombek lectures at the School of Architecture at UIC, and back on Wednesday the 17th, it's another logjam night, with not only Grant Park Renovation, but  ULI Chicago offering up a panel on Real Estate Forecast 2011 at the Hyatt Regency.  That same evening, AIA Chicago and the Consulate General of Sweden Chicago will be presenting two panels on From Brownfield to Urban Oasis, talking about post-industrial plans for Chicago's South Works site.  The panels will include SOM's Phil Enquist, the Chicago Department of Environment's Dave Graham, Gunnar Söderholm, Head of the Environment in the City of Stockholm, and a host of others from both the U.S. and Sweden.

Then on Friday, the 19th, the Harry Chaddick Institute of DePaul will be presenting a panel, Reinventing Community: Branding, Rebranding and Economic Development, moderated by Urbanophile's Aaron Renn, with a keynote by Claudia Sieb giving a national perspective on branding, and Carl Wohlt offering up "cutting edge techniques being used to brand local communities."

I don't think it's really what Renn, Sieb and Wohlt have in mind, but lately in Chicago, branding seems most lately to have devolved into trying to sell off naming rights for everything from L stops to fire hydrants to anyone willing to kick a few bucks into our depleted civic coffers.  Can we get alderman to pay for their own salaries by having GoldenPalace.com tattooed on their own foreheads?  Can we train our pigeons to choreograph themselves in Busby Berkeley-like formations to promote Birdbgone?  And really, why have we let them call it the Viagra Triangle all these years without shaking down Pfizer for some really big bucks?  But I digress.

On Monday, November 22nd, landscape architect Thomas L. Woltz will be lecturing at Crown Hall, IIT. And Wednesday through Friday, the 17th through 19th, the Greenbuild 2010 International Conference and Expo will be taking over McCormick Place

There are over two dozen great events still to come in November.  Get the details on all of them here.